We did a lot of wandering around the web reading blogs and watching videos on YouTube while planning the trip. We also talked to friends that had been to Croatia and Greece. Then we did what we usually do: plan as little as possible and the trip “happen to us.” Sort of.

We booked our first three stops of the trip before we left: Zagreb, Rovinj, and Mali. That turned out to be almost perfect. We would have stayed another day in Rovinj if we hadn’t already had a place paid for in Mali. 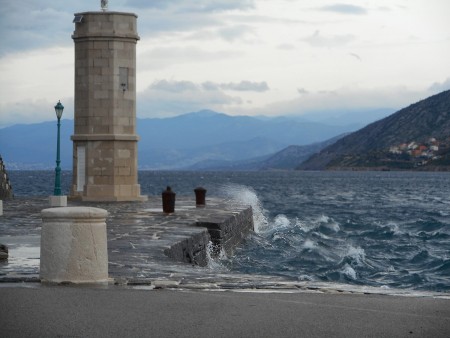 But when the rains started, and the crowds departed, we considered changing the overall plan. We looked at extended weather reports for every place we wanted to go. It was rain and chilly in Croatia, rain and almost chilly in northern Greece, sunny and warm in Crete and Santorini. So we decided to cut the Croatian section a couple of days short and start the Greece section in Crete rather than end it there. We were glad we hadn’t mapped out and booked rentals for the entire month.

We couldn’t stay any longer at our place in Mali anyway. We were the last booking of the season for our hosts. They were closing up their house and heading for a month or so in Cuba the next day. 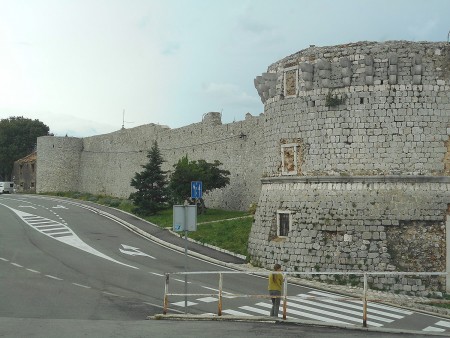 So we packed up and headed to our next destination: Plitvice Lakes in the Plitvice National Park. We had planned two days there but we cut it to one because the forecast was for rain and fog. Not good conditions for visiting a place known for beautiful vistas.

We drove back up Losinj into Cres, but halfway through we headed east to Merag, Cres for a ferry to Valbiska on the island of Krk. Geni wanted to practice some Croatian and do her usual “chat with the teller” thing with the ferry clerk. But he said: “Go now! Ferry leaving!” Sure enough, we were the second to last vehicle to make it onto the ferry. They must have changed the schedule because the info we had said that we would be at the ferry terminal for almost 2 hours. 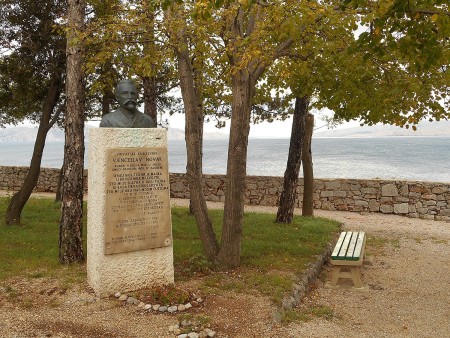 Krk is mountainous like Cres and Losinj but perhaps not as tall. It’s the largest island in the chain and we saw signs for villages with names like Vrbnik, Brzac, Krk, and Stara Baska. Krk is connected to the mainland by a bridge over a narrow channel in an impressive, stony gorge. Then on down the mountainous coastline with the ocean only occasionally visible, to Senj and our turn inland for Plitvice.

It was windy and cold in Senj, and the fortress was closed for lunchtime and we had to pee. So we did the usual, went into a cafe for coffee and a croissant so we could use their toilette. (The first three photos of this post are Senj.) 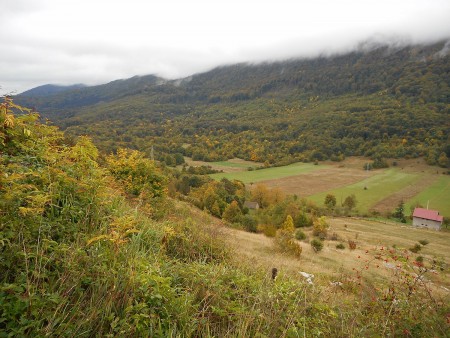 From there it was up, up, up into the mountains to Korenica, a small town about 10km south of Plitvice National Park. The mountains seem heftier and taller than the Cascades, if you don’t include Mt. Hood and the Sisters. But they fold in and out more like the mountains of Vermont. There were no signs of clearcuts, though we did see an occasional log truck. The logs were twisted and short and they we be used for fence posts in eastern Oregon, but here we’d seen them used as rafters, furniture, and fence posts. Most structures are built with inexpensive hollow red brick with a solid concrete post every four or six feet. Then the entire home or shop is covered in tinted stucco. 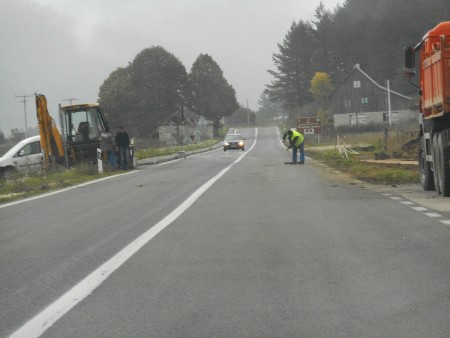 The countryside, as everywhere we’ve been in Croatia, was spectacular. Fall colors were coming in, there were trees and farms and villages everywhere and the homes were taking on a bit of the look of Austrian or Swiss mountain houses. Along the way we got stopped for road work. Both lanes of traffic were stopped for several minutes while a guy used a push broom on one edge of the road and two other workers watched. They appeared to be watching us with a barely held-in laughter. So we took a picture.

We arrived in Korenica late in the afternoon and spent our usual 1/2 hour or so going back and forth trying to find the place. We were looking for House Mijic. But it seems that every house has a room or a floor as a rental, so every post and light pole had a sign or two for House Adianna or House Plivic or House Ciminc. We went past the sign for House Mijic three times before we saw it. The directions and map on Airbnb were useless and the street didn’t have a street sign. That didn’t actually matter because the address for House Mijic wasn’t 102 Side Street or something like that. The address was: House Mijic.