A New Friend Up an Alley in Heraklion 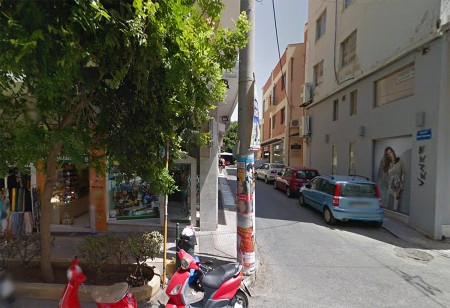 We were tired, frazzled, and packed full of adrenaline from the driving in Heraklion. We were hungry. We asked the night manager to recommend a place for beer, wine, and food. He looked at us for a second and said: “You’re not wanting touristic places are you? You’re wanting locals place, I can tell.”

We both nodded. This has happened numerous times. We are obviously “not from around here” but total strangers seem to know we are seeking out the local life more than the tourist scene. He pointed us to a place at the end of an alley a few blocks away.

We walked past it, because it looked too quiet, or too dark on the way to the lights, or too something. Nothing much seemed to be happening. We went uphill a ways, thinking we hadn’t gone far enough, and realized that must have been the correct alley.

We took deep breaths, held hands and entered the darkness. There were two places across from each other at the dead end of the alley. One was more restaurant than taverna, and one was more taverna than restaurant.

As we approached it became like one of those moments in an old cowboy movie when “the stranger walks into the bar.” I felt like there was a film director in the editing room saying: “cue the ominous music.” There were three tables full of families at the restaurant, a table of kids in their twenties at the taverna and, in the darkness deep at the dead end of the alley, a table of five or six men.

The families broke their stares and returned to eating, drinking, and chatting as if we were no different than any other couple walking into their neighborhood bar.

We walked up smiling and nodding. We approached the nearest table at Retro Estiatorio, the taverna, and pulled out chairs, hoping they hadn’t stopped service for the night. One of the kids at the next table stood up and rushed over with a panicked look on his face. He said something in Greek. Probably “How may I help you?”

We said: “Are you serving food? Do you have wine? Beer?”

The look of panic turned to terror. “One moment, one moment.” He rushed to the table of men in the back darkness. The youngest of them stood up and came over. He was Nikos Vlasakis, the cook and manager and he had a huge smile on his face. He welcomed us to his restaurant and apologized for the fact that this was his young waiter’s first few days of work and the boy didn’t speak English. But he would be happy to speak English with us. He had lived in London for several years but that was long ago.

He explained the menu, told the waiter what we wanted, and then sat with us for two hours. We talked about Crete, Oregon, London, our kids, his friends, and much more. Nikos was a great host. After a while we noticed that we were the only ones left in the alley and the waiter was yawning. It was 1 am and Nikos introduced us to a Cretian custom: two shots of Raki and a small dessert. Raki is a form of white lightning made from wine. Nikos explained that there are many different types of Raki, and he explained why his Raki is the best.

He wasn’t lying. It was very smooth and light. Not what we’d expected. It had that white lightning bite, but not the burn and the pain. The custom is to shoot the first shot, then sip the second. The dessert was a delicious flan.

(Update: I can now confirm that Nikos’ raki is the best in the land. We had raki at almost twenty other restaurants and bars during the remainder of our trip. It was never as good as Nikos’.)

Nikos hopes to move to San Diego someday to learn new techniques for cooking. He is especially hoping to learn Asian styles. I’m sorry I don’t have photos, but we forgot to bring our cameras out with us that night. So I grabbed a screenshot of Google Street view, looking up toward Nikos’ restaurant. If you look through that skinny opening between the foreground light pole and the building to the left, you will see the trees at the end of the alley. The tables to Retro and it’s neighboring restaurant are under those trees.