(The following sentence isn’t true, but it felt like it for a while until we figured things out.)

Nobody likes us, here in Prague. Walking down the street, we’re invisible. Have we reached that age where we become invisible? Are our clothes weird? What the hell?

It’s not just on the streets, but also in store aisles and waiting in the checkout line. Nobody looks at us. How rude. What’s wrong with these Czech people?

Then we notice that they don’t look at each other either. Not until it’s time for a direct question, like, do you speak English? How much for a beer? Where are the corkscrews? Then they look at you and answer: little bit, in aisle dva, no corkscrews in the wine aisle; wine store only.

There’s nothing wrong with the Czech people. Their culture does eye contact differently, that’s all.

One of my previous posts mentioned cultural Hellos in foreign lands. It’s related to when we were hiking in Crete and I became a bit of an obnoxious American and went out of my way to say hello to Germans and other northern Europeans when it became obvious that they had no interest in interacting with other humans. It wasn’t nice of me to thrust my American style of interaction on them, but it was entertaining so I did it anyway. Stupid American. 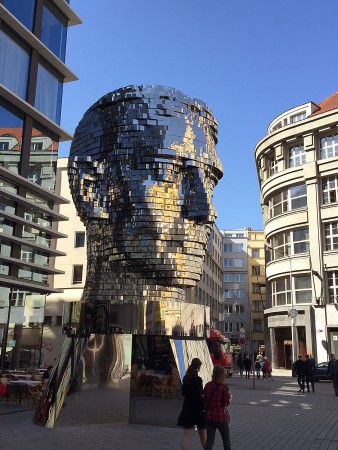 Bear in mind that I’m not a trained sociologist, or psychologist, or any other gist. I have better-than-average observational skills, off-the-charts curiosity, and a tendency to make shit up. Read further at the risk of spreading my inadvertent lies and unsupported guesses.

(Note: a quick search for “eye contact” will lead to a lot of lame guys talking about how to catch the eyes of beautiful women. This isn’t that. Those guys are lame.)

In America, walking down the street, our eyes rove and we glance at other people. The glances are brief, but sometimes linger, based on attraction, or the level of weirdness of the other person. Sometimes our eyes have a tiny contact, sometimes they lock. If the street is crowded, you miss most faces and eyes, but catch many others. It generally means nothing. You’re two strangers walking in opposite directions down the street. But that momentary glance means a lot. It means you exist. Someone noticed you. You’re sharing the world.

In Croatia last year was the first time I noticed something was different. People didn’t seem to look at each other as much, but it wasn’t a huge difference from the U.S. We noticed something wasn’t the same, but it took a while to pin it down. There were a few people, other tourists, whose eyes definitely didn’t stray, and it didn’t take long to realize that they were Germans, Austrians and other northern Europeans. It was especially obvious when we were in Mali, Losinj, Croatia because that is a favorite vacation spot for people from those countries.

They walk with heads and eyes facing forward. The women often walk a few feet behind the men and then they get away with shy glances at other people. But Geni saying Hello caused definite consternation. The men looked, frowned, looked away. The women seemed embarrassed but said Hello back.

In Crete and Greece, the women’s eyes watch other people much less than Americans, but more than Croatians.

The Crete and Greek men stare. Their eyes are black. It feels like a challenge. I tended to let them win the stare-down contest. It’s their country. No need to stir things up.

Geni, of course, used those stares as an invitation, and it worked. If she saw somebody staring at us, she waved as we went by, or said Hi! if we were close enough. The response was immediate, genuine, and surprising. Instant smiles appeared on their faces and they waved back or said Hello! in response. Just because their faces at rest didn’t show a hint of happiness didn’t mean it wasn’t at the surface waiting for an excuse. They seemed caught by surprise that a woman was speaking up, but they didn’t hesitate to engage.

I have no idea what it is in a culture that dictates something like eye contact in the street. But I think the age it begins is somewhere in the 6 to 8 year range. The littlest kids have no problem looking directly at us in Prague, or anywhere else we’ve been. But beyond that age range they have the same eye interactions as their parents.

Once we got used to it, it was no big deal. It’s who they are and how they do it. When you talk to someone, they’re like anyone else: willing to listen and to help, ready with a smile at a mis-pronounced word or a frown at a pronunciation that was from another planet.

Now, here comes a random, probably incorrect conclusion: limiting street eye contact leads to good peripheral vision. They aren’t NOT seeing each other, they’re just not looking directly at anyone else.

I was able to prove that when it was raining two days ago and the umbrellas were out by the hundreds. My initial assumption was that people would be bonking each other like crazy because they weren’t looking at each other. I was wrong.

I had my hoodie on and I saw the same level of non-eye contact going on that I’d become used to. But, somehow, they were shifting their umbrellas at the last second to avoid hitting me in the face or the head. I was surprised at first, so I began to walk closer to people. Sure enough, same non-look, but same ability to shift the umbrella.

So I tested peripheral vision. I stood along the wall of a building and waited until people were almost at 90 degrees to me. Then I made a sudden move in their direction. They instantly jerked slightly and looked at me to make sure I wasn’t about to walk into them. No one walks around thinking to themselves “I’m going to use my peripheral vision really well today.” The Czech people seem to have developed it better. Because they don’t have street eye contact? That’s my guess. Go ahead, pass that random assumption on. Feel free.

I guess I’ll have to go to New York, Zagreb, and Athens to make sure.

Now I have a new mission: I’ll be the guy randomly lurching out at people on the sidewalk to test their peripheral vision, or catching their eye for a stare-down contest, or saying Hello when least expected. Maybe I should come up with a list of entertaining street experiments and set up a crowd-funding page for my non-scientific research. Hey, can you spare a buck for an obnoxious social observer?