Home Travel Greece Crete God, or the Universe — Something Pushed the Brightness toward Infinity

God, or the Universe — Something Pushed the Brightness toward Infinity 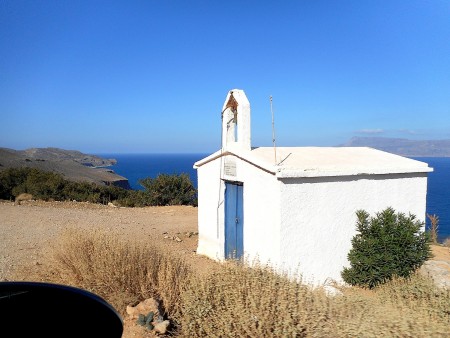 Go ahead and step outside, wherever you are. Look at the sky. Look at the light as it bounces off the houses and trees and streets. Now pretend that God, or the Universe, whichever you prefer, took the Brightness slider and pushed it so hard you have to squint and turn your head away to give your eyes time to adjust. When you can open your eyes again, everything is different. You feel out of place, the world is different, you’re not sure what happened but you’re not at home and you’re definitely not in Kansas.

Chances are you’re in Crete.

So you spend a couple of thousand years fussing with shades of white. Because, well, white isn’t white enough. It needs to be whiter. It’s the year 2015, and you’re closer, but still not there. Who would have thought white was so elusive. But that’s okay. You’ve got another couple of thousand years to work on it. Sit down with your family and friends. Wave your hands in the air and talk real fast as if each word is the most important word that has ever been spoken. Then, tomorrow, work on that next shade of white you’re been thinking about.

So you worked at it. You kept tweaking the white and finally brushed some on a wall as a test. You think it’s not enough but your neighbors go wild . . . let’s paint everything in Nikos’ new white! The walls, the roofs, the fences, the damn cats and dogs. Brighter! Brighter! Whiter, whiter!

Wait, what’s going on over there . . . on that other hillside? Someone used sandstone tint? Someone used pale yellow? Peach? Salmon? What happened? Are they crazy? Did they run out of white paint? Ah, they must have gone sick in the head. We must not let our daughters marry their sons.. We better make sure none of them move over to this hill. They better not come near one of our chapels with their salmon or their yellow.

Here is an example of people trying to figure white out using modern online-ness. Someone should tell them to visit Crete.

But if you were born in Crete, apparently the world is not as bright as it should be. The sun is a slacker. The sun needs help.