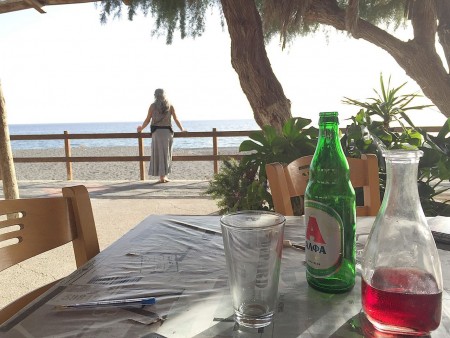 Tension had been high from our first meal in Crete, throughout our time in Crete, during our days in Santorini, and all the way until yesterday. The Secretary of State was going to have to make an emergency trip to stave off the use of the military.

We’ve been holding out on all of you friends that have been reading these posts. We didn’t want to scare anybody or cause undue alarm until we got to the bottom of the issue.

During our time in Croatia, we’d never once had a problem getting good wine with the simple request for crno vino, or red wine. It was always good, and always inexpensive.

We assumed that this would continue in Greece. We used our English/Greek phrasebook on the plane from Athens to Heraklion to determine that the proper words in Greek for red wine were kokino krasi. The result to this request has caused weeks of confusion and consternation: we were given glass after glass, carafe after carafe of . . . vinegar water, or something that tasted very nearly like it.

We were too confused and embarrassed to say anything. And there were never potted plants close enough for the dumping of the foul liquids, so we gritted our teeth and chewed it down. We kept thinking that previous attempts had somehow been an error in translation, but no, we kept getting turpentine in our wine glasses. We finally settled on the technique of buying full bottles of dry red wine, even though we really only wanted a glass. The bottled wines were generally what we expected, though not always. Unfortunately, not all tavernas have bottled wine.

We googled the issue and didn’t find any conclusive answers. The closest we got was a blog by an American guy who mostly talked about retsina. But he said that many many years ago the Cretans and Greeks had added a bit of pine resin to their wine as a preservative. Over time, they developed a taste for it. Then, during the German occupation of Crete during World War II, they added even more pine resin to make the Germans sick. But it backfired and the Cretans got used to it and continued with that flavor “enhancement.”

(This theory has been discredited, but it sounded good so I passed it on to you. This is how Internet misinformation gets passed along.)

We’ve finally cracked the code. It turns out that when you ask for kokino krasi you’re asking for the cheapest wine straight out of the barrel from the most recent harvest. Sometimes it has water added to it. If you want good wine in Greece, you need to buy it by the glass from a specific bottle that you know, or buy the bottle.