My Favorite Croatian Road, So Far 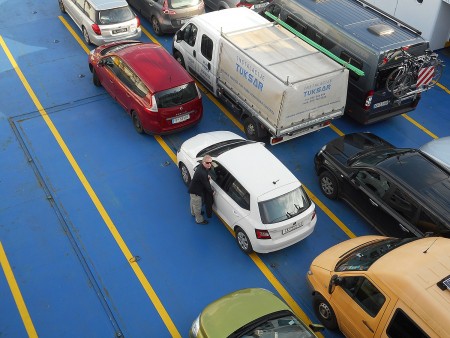 From our spot at the ferry landing in Brestova, we could see the ferry boat across the water at the landing at Porozina, Cres, Croatia. We had an hour wait and Geni surprised the woman at the cafe with a tip. The woman spoke very little English but we were fluent at pivo and crno vino, so not a problem. There was an extensive menu, but when I went inside to order I saw that it was packaged sandwiches like you’d find in a 7-11. That was a surprise because everything pre-made that we’d seen till that time was wrapped in croissant or french bread.

We followed a Scandinavian family onto the ferry. The dad ignored the boatsman’s orders to stay in the middle-right of the 6 lanes. I followed him into the middle-left because the other one already had a combivan (small RVs in US), a small highway work truck, and an empty 1/2 size tour bus in that lane. We went from being 7th in that lane to 3rd in, hopefully, a faster lane.

The ferry was a big deck with high sidewalls and ramps at each end. It wasn’t even half full when we pulled out with 32 vehicles aboard, including one large tour bus and several trucks likely carrying supplies to the towns on the islands. 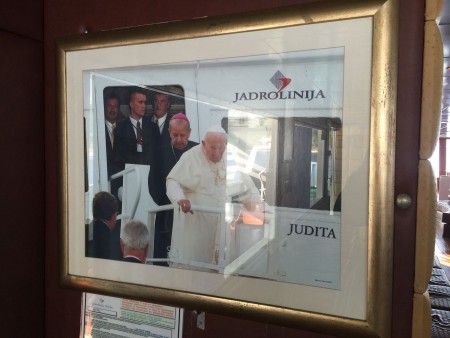 Stairways on each side went up to viewing decks and a lounge/cafe that straddled the ship. There were seats and tables for about 150 people, big screen TVs showing futbol games and a big picture of Pope Benedict, flanked by bodyguards, stepping out of the lounge, and onto the viewing deck. “Yes, this very ferry ship,” I was assured by the waiter.

The day had been gray since we left Rovinj that morning, and the sky was lower here at the water between the mainland and Cres. The mountains on each side were very steep and the mists wrapped through the trees. The occasional red roofed villa stood out in the green and gray.

It was a short trip and after eighteen minutes everyone rushed to their vehicles and started their engines. Two minutes later the first car in our lane bolted out of the boat and we followed. We ended up fourth going up the hill (even with four lanes of cars kinda-sorta taking turns to get off the boat) because somebody in one of the other lanes (looked like an elderly American couple) got befuddled by signs and dividers and backed up two of the other lanes. Horns ensued, but we swept on by.

Why the rush to be quick off the boat? Remember the switchbacks down to Brestova? Not quite as steep at Porozina, but a big ascent nonetheless. Which would you prefer: zooming up the winding road in your little Skoda with Audis, Benzes, and BMWs, or hunkered behind a gravel truck for the ten kilometers between you and a spot long enough for passing? Not necessarily a spot Geni would approve of, but good enough. 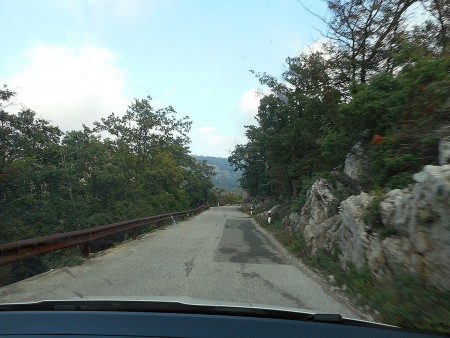 What followed was, by far, the greatest mountain drive of my life. I’ve driven in the mountains of almost every Western U.S. state, most of New England, parts of Canada and a lot of Alaska. The next 25 kilometers was the funnest, wildest, craziest drive I’ve ever taken. Bonus: a wife by my side begging for reduced speed. Sorry dear. I’m good at this and it’s very fun.

(Before anyone starts complaining, she actually got into it and had fun.)

Geni drew the line when I pulled out my iPhone 6 and started driving with one hand so I could videotape. She grabbed the camera and kept it running. I’ll figure out how to post it on YouTube or here on FB because there are some pretty hilarious moments that came up in the conversation.

I’ll try it with words for now. At the top of the climb from Porozina was a road that ran the crest of the mountain that forms the island Cres. It was rocky up there, with shrubs, rock walls, and sheep. The road was a lane and a half wide at the most. It was winding, it was up, it was down. It had no shoulders and an occasional busted, rusted railing.

Sometimes there was a huge drop off down to the ocean, sometimes there was a rock wall on each side of the road. Sometimes an insane BMW driver, still pissed off that he’d been stuck behind a gravel truck, the combivan and two carloads of American tourists, flew up out of nowhere and pushed his way past like it was a normal thing to do. One time that happened each of us had wheels off the asphalt in order for him to get by.

After getting passed a couple of more times, I was completely in the groove and nobody else caught us up. We were in the clouds, the sheep were smart enough to stay off the road, Geni gave up on asking me to slow down.

Then it ended. We reached the middle of the ridge at the top of the island and you could see the ocean on each side. The road widened to two lanes and it was striped. There were shoulders. Some road builder had spoiled the fun.

Cars slowed down to enjoy the view. Geni took a deep breath.

That’s just pure conjecture. I know nothing about how Croatia funds its highways.