Home Travel Greece Crete Not the Palace of Phaistos, Yet

Not the Palace of Phaistos, Yet 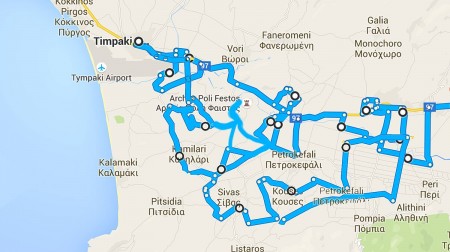 So far we’ve been traveling under modern “adventure” mode, which means without the use of GPS. Geni sits with a couple of maps, and I try not to kill the young couples on motorscooters.

We got lost within five minutes of our first drive in Croatia, but we figured it out and got going. We’ve gotten lost many times, and always figure it out. I’ve got an excellent GPS app on my phone, but we hadn’t turned it on once. Often, it’s the little side trips that are the most memorable. That all stopped after our day from Spili to the Palace of Phaistos.

Phaistos is considered the second city ever founded in Western Civilization. We assumed it would be easy to find. Ha! 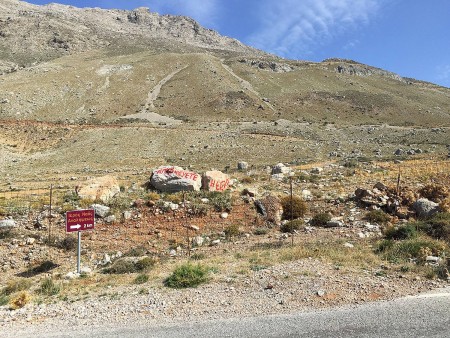 We drove through the mountains toward the southern coast of Crete. There was a slight detour onto a high mountain road off the main road for a construction reason of some sort. At the crest of the detour road there was a brown sign for an old church. (The brown signs mean cultural location this-a-way.) But there was a fence across the entrance to the road to that church and the road would have required a Hummer or a tank anyway. Our little Chevy, with itty-bitty tires, wouldn’t have made it fifty feet.

We dropped out of the mountains on a long curve that revealed a valley with thousands of plastic greenhouses. I’m not exaggerating. Thousands of them. In every direction and as far as you could see. About one third of them were abandoned. The plastic was hanging in tatters and blowing in the wind. The in-use greenhouses were a mix of baby plants on up to solid green to the ceilings. They are growing fruit for Europe and it looks like they simply abandon the greenhouses when the plastic gives up and build another one next door. Which is weird because the metal framing is still in place and looks fine. Hmmm. (Sorry, no pics. They didn’t seem interesting enough at the time.)

Anyway, on to Phaistos. Or is it Phestos? Festos, Faistos, Phastos, festos? Yep, we saw signs with each of those spellings. It took us a while to figure out that they meant the same place. And that didn’t include the versions in the Greek alphabet. (And yes, that last version is lowercase on purpose.We saw it that way a couple of times.)

It was not unusual to see three signs within fifty feet of each other, each with a different spelling. Let’s make it tougher, shall we? Many of the English words on the signs have been covered up with black spray paint. Many of the signs are mostly covered by vegetation. Many of the signs have an arrow pointing this-a-way or that-a-way before you get to the intersection. When you arrive at the intersection it’s not uncommon to have two or three choices for “that-a-way” from the sign, but no new sign to actually steer you.

And that’s all if the sign hasn’t been totally obliterated by bullet holes. (My biggest regret of the Crete part of the trip is that we didn’t get any decent pictures of the signs! Sheesh.)

It gets better. We went past the Phaistos hill three times. It was right there, within sight. But to us it was just another hill with trees on top. We kept looking for the big FAMOUS INCREDIBLE ANCIENT RUINS THIS WAY sign. Or the PSSST, HEY TOURIST, OVER HERE sign.

Nope. But we saw many signs that were easy to follow . . . for the beaches. By then we were on hour 2 of not finding Phaistos. We’ve driven through a gritty, crowded city twice, and the same village three times. We’ve stopped and asked for directions. I’ve caught my hand sneaking toward the GPS button on the phone, but NO, not after all this. We WILL FIND IT!

Why the hell is it easier to find the beach than to find one of the world’s great treasures? Because Crete is a favorite destination for Germans and other northern Europeans. They want to swim and they care not for the piles of old rocks that used to be walls.

We stopped at a gas station. Two men were under a hood talking about some important car part when I approached. They seemed a bit peeved and both shook their heads when asked if they spoke English. They understood the word Phaistos though and looked at me like I was an idiot. They gave each other that special look used when communicating about dullards, boneheads and other mentally challenged individuals, in front of said dullards.

Sorry about the lack of pictures of the road sign craziness. We were too frustrated to think of that. Coming next: actual words and pictures about the Palace of Phaistos.