Home Travel Montenegro Our Lady of the Rocks in Perast, Montenegro

Our Lady of the Rocks in Perast, Montenegro

It rained off and on for several days, and was getting chilly, so we spent several hours looking at weather forecasts and checking plane flights and ferry schedules. We decided to cut the Croatian section of the trip short by two days, and start the Greece section with Crete instead of ending it there. The rain and winds were regional from the Czech Republic down into the Peloponnese of Greece. Crete looked warm and sunny. 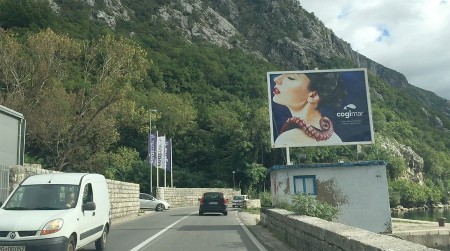 We decided to drop one of our two planned days in Montenegro and two days of driving through Albania. But we’re glad we took a long day trip to Kotor, Montengro. The drive from Dubrovnik crosses the border into Bosnia and Herzegovina, then after just a few miles back into Croatia, then into Montenegro. It got a bit confusing with trying to figure out which customs lane to get into because the signs never matched up with the booths that were actually open. One guard got tired of us digging around for our passports (the border came quicker than expected) and he waved us through with a big roll of his eyes.

It was easy to see the differences in country wealth. Bosnia and Montenegro definitely didn’t seem to have the same amount of wealth in their towns and citizens, or they were choosing to spend it differently. The roads and villages seemed run-down and there was a lot of litter. It was very noticeable after so many days in Croatia. The closer we got to Kotor, though, the cleaner and nicer it got and began to seem like Croatia’s little sister. 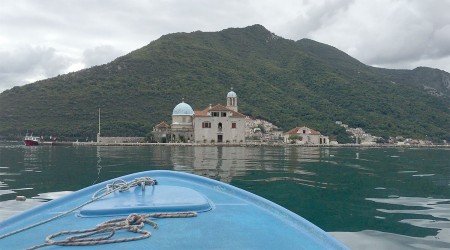 Kotor is deep in a bay many miles from the Mediterranean. The mountains are steep all around and the road stays close to the water. There is a ferry at the narrowest point in the bay and that can save a lot of driving time for people at the south edges of the bay. We decided to drive the coast road clockwise all the way to Kotor, then keep going clockwise for the return to Dubrovnik and take the ferry that crosses Kotor Bay at it’s narrowest spot. 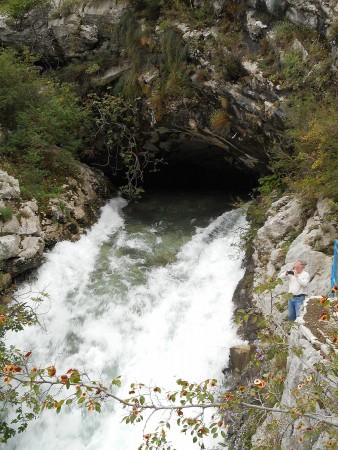 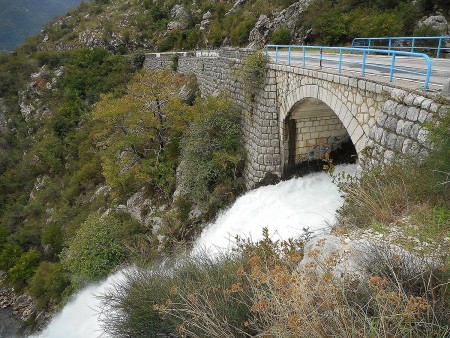 For a sense of scale, look for me in the picture of the river coming out of the mountain. I got as close to it as I could so Geni could get a good photo, but if I had slipped it would have been certain death. The volume of water was immense and smashed into huge boulders on it’s way to the bay. The river actually begins somewhere underground in the mountains in Bosnia and runs for miles until it charges out of the mountainside.

Soon after that we came to the village of Perast. Medieval Perast was known as the City of Ship Captains. The captains were thought to be so good that the Venitians (rulers of the known world at that time) sent the captains of their Imperial Navy to train there. It also was, and is, a town of accomplished fishermen. 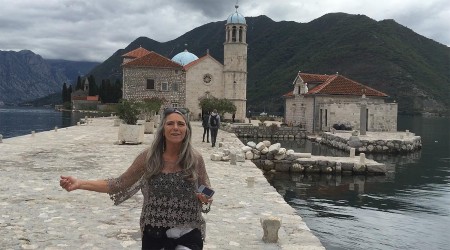 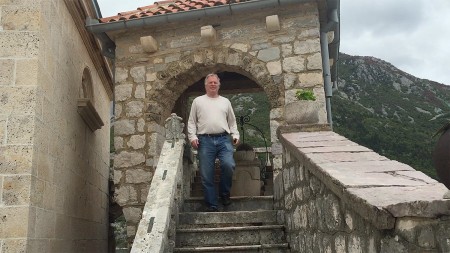 One of Montenegro’s top tourist draws is offshore of Perast by a few hundred meters. Our Lady of the Rocks is a church on a tiny island. The story goes that centuries ago it was a shallow underwater spot and every day each fisherman would drop a rock there on his way to the fishing grounds. With each dropped rock, they said a prayer to the Virgin Mary for good luck in fishing. Over the centuries their rocks became an island. Where better to build a church dedicated to Mary?

There were three teenage boys sitting on lawn chairs in the town parking lot. They tried to flag us down, but it looked like parking there wasn’t a requirement and we could drive into town and have lunch. We knew the church was there but the afternoon was already late and we wanted to get to Kotor. We got halfway down the road and saw a tour bus coming toward us down the very narrow street. If there had been a shoulder we would have been okay. But the shoulder was the bay.

We had to back up several hundred feet to get out of the way and the bus driver didn’t slow down as he approached. One of the boys in the parking lot took that opportunity to talk us into a ride in his skiff out to the Lady. 10 euros total, round trip in the first fiberglass boat ever built in Montenegro by his grandfather the ship’s captain and boat builder. Geni and I are always open for serendipity and this was one of those moments. We parked the car and shook hands with Dragan. He was very proud of the boat he had inherited from his grandfather and he was very proficient at driving it. He had a patter that went with the trip and he managed to sneak in several local stories during the ride.

During a break in his commentary, I pointed to the large yacht anchored nearby. “Russian oligarch,” said Dragan.

“Has the skipper invited you for a drink and to talk about navigation in the Bay?” I asked.

He looked at me like I was crazy. “No, of course not,” said Dragan.
“You are a captain of your ship, he is a captain of his ship,” I said. “It is common courtesy. Perhaps we should motor over for a chat?”

Dragan laughed and shook his head at the crazy American. His hand did not budge on the tiller. He dropped us off and returned to his spot at the parking lot, hoping for another customer or two while we explored the island and the church. Every bit of the Lady of the Rocks was magnificient, as so much that we’ve seen on this trip.

Photos weren’t allowed inside the church, so I swiped one from a blog called The Travels of BBQ Boy and Spanky. (Permission request has been sent.)

The photo, as you can imagine, doesn’t come close. Every square inch, from floor to ceiling, was art. Holy art created by people who put their heart and soul into every brush stroke and every cut of marble. These were people living a harsh life, compared to us Americans, but they made the time and the effort to create beauty that has lasted for centuries. Not many among us can say that. 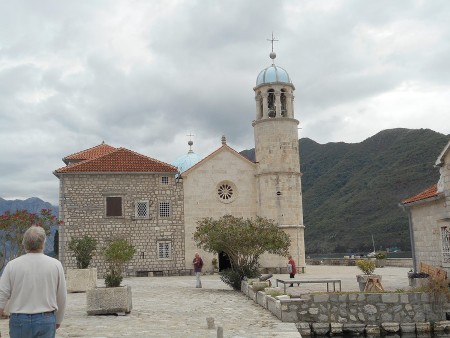 The visit to the church was free, but the museum in the attached building was 2 or 3 euro. It was very worthwhile. There were walls of ancient carved rocks, drawings of sea captains, a room filled with the tools of the sea captain trade (including weapons) and art created by their wives while they waited for their husbands to return from distant wars.

A tour bunch of about 60 arrived on a big boat. The church is very small and they had to take turns visiting it in small groups. 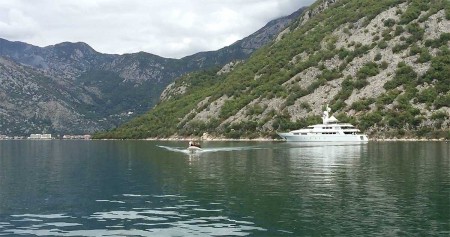 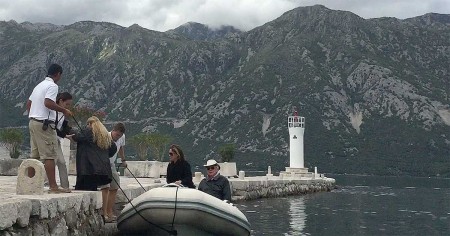 A moment later the Russian oligarch and his family departed their yacht and headed our way on a dinghy. (Word was that the big white boat was their “runabout” and that the real yacht was at the wharf in Kotor and had a landing pad for their helicopter.)

They were escorted by a team of security and sailors in matching white shirts and khakis. A man in a similar uniform had been wandering the island the entire time of our visit. He must have been scoping the area for terrorists. Not finding any, he had sent the all-clear signal on a walkie-talkie.

Dragan arrived at the same time for I return trip, so I used that moment as cover to record video of the big shots. I held my phone like I was carrying it, rather than recording with it, but a close look at the oligarch in his white hat shows that he was on to me.

Dragan had brought a friend of his along for our return trip. The friend was his apprentice guide and boatman. Dragan was a stern, yet patient teacher. I asked if he was planning to build a fleet of runabouts to compete with the bigger tour boats. No sir. He hopes to become a sea captain and live his life in Perast like his grandfather.