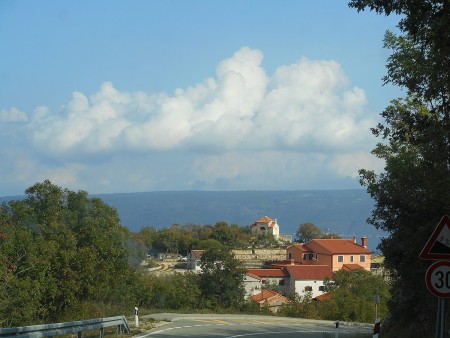 The road from Pula toward the islands of the upper Dalmatian archipelago wound through a low hills, rocky, shrubs and small trees countryside. There was a village of 5 to 50 homes every few kilometers. You could see the village from miles away because of the church steeple sticking up above the trees. Many of the churches appear to be abandoned. Perhaps the population is smaller, or fewer people are believers?

Every village needed its own church because it was too far to walk to the next village. And also, when you’re building with rock and the timbers of small trees, your roof span is much shorter. Therefore, fewer seats in the pews. It wouldn’t do to have the neighbors from the next village show up. Where would they all sit?

And it wouldn’t do to make the church longer to compensate. They didn’t have hearing aids in those days and if grandpa showed up late he wouldn’t be able to hear the priest. Although, maybe grandpa would have preferred that. Extra nap time!

Those are guesses though. And perhaps another guess leads to the answer of why so many churches go unused: the advent of the car made it easier to drive to the bigger, nicer church five villages away.

Those folks in the village named Vrh (not a typo, but if you have a vowel to spare I’ll get the mailing address for you) really stepped up and carried more rocks to make a bigger church. And they dipped deeper in their pockets for the frescoe painters and the marble sculptors. If you’re going to pay for incredible art it’s best to share it with the neighbors in the place you all go every week for services and gatherings. 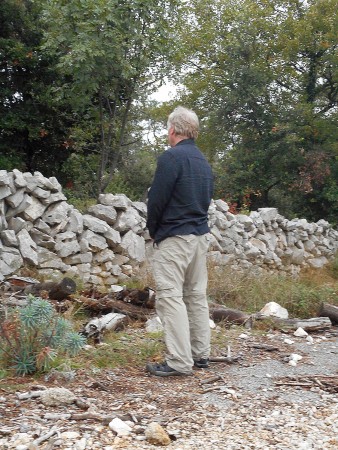 The homes in the villages were surrounded by short rock walls. There were miles and miles of these rock walls and they were separated by about 50 feet of ground. The walls marched off into the distant shrubs with an occasional sheep sticking its head up. The ancient farmers had to clear the rocks to find enough ground for planting of olive trees and family gardens, and for the goats and sheep to have an easier time finding greens. (And another reason for your own church . . . too many rock walls to clamber over on the way to confessing your sins of the week. Confession is hard enough as it is.)

(Sorry about all the adjectives: incredible, majestic and so on. You’re going to have to live with them. My travel log is littered with these words because nothing else works. In fact, they tend to fall short of the reality. A side effect is that I now realize how limited the English language is. Even my online thesaurus isn’t much help.)

Geni enjoyed the vistas while I craftily snuck the speed up. It’s so much fun to drive on windy mountain roads. Especially when the other drivers expect you to go fast, and don’t mind if you pass them in a tight spot. Bonus: flashing brights from an oncoming vehicle warn you about an upcoming speed trap.

At speed traps, the two blue-uniformed officers stand beside their car. One has a radar gun up to his eye, and the other holds a big round paddle in her hand. The paddle says Stop in big red letters. If the paddle goes up and she points to the curb, you’re busted buddy. 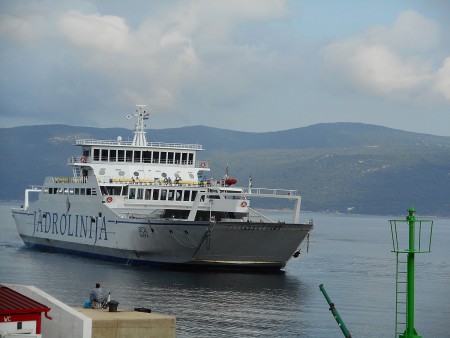 We were nearing the top of a set of mountains and came to our turn downhill to the town of Brestova and the ferry to the island Cres. Google said Cres would be an hour drive to the bridge across to the island of Losinj. The map, with full support of Google, said that Brestova was five kilometers away. We laughed. Ha ha! No way it can be that close. We are thousands of feet in the air. And look at how steep the mountain is. Google must have believed the map makers of Croatia.

Well, they were right. Switchback heaven. Around and around, down and down and down in second gear with frequent touches to the brakes. And guess what?! A guy in a black Audi decided I wasn’t going fast enough. So he flew by me at the beginning of one of the switchbacks! Holy F-ing Shit! We rounded the turn expecting to see two broken cars. Nope. He was already going around the next turn. Let me make one thing clear, and those who have ridden with me can verify, I’m no chickenshit driver. I like to go fast. I’m good at it. But that guy was insane.

Anyway, around the final turn and, huh, Brestova isn’t a town. It’s a cafe, an outdoor two stall WC, and a ferry landing in a tiny bay filled with the clearest, greenest water either of us have ever seen. This is no exaggeration. You can see individual rocks on the bottom forty feet down. And the water is emerald. Light emerald over the pebbles and sand along the shore and deeper emerald with depth. 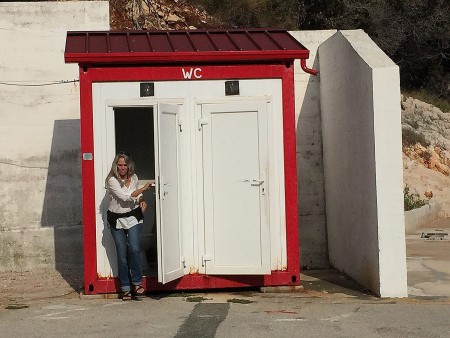 We paid a visit to the WC. Geni got their first but guessed wrong and ended up with the one with the broken handle. Luckily she could hold the handle while using the pot. She kept her skin several inches away from all surfaces of course. And speaking of that, it was the rankest WC of the entire Croatian trip. We used the WC at four different gas stations. Two in cities and two in the boonies. All four were pristine and tiled nicer than our bathrooms at home.