Home Travel Prague So Much for My Jet Lag Theory 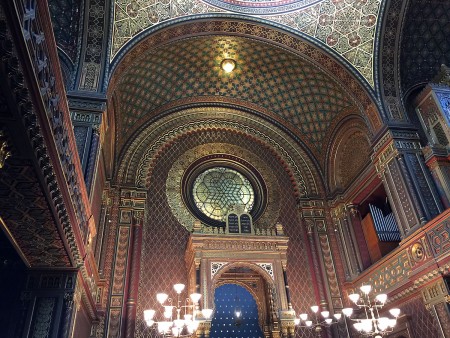 Jet lag snuck up and got us after all.

On day two we went to the Spanish Synagogue in the Jewish Quarter of Old Town Prague for a classical concert. There were five strings and a trumpet player from the Czech National Symphony Orchestra, and an opera singer in a beautiful, ornate room with surprisingly few seats.

We’re not big classical fans, but we stumbled onto the venue, and the posters in front, during our first day of wandering around Old Town. We’re here for the adventure so we plunked down the $30 each and wandered some more as we waited for show time.

The pews in the synagogue seated only sixty and they had another forty folding chairs set up, but many remained empty. I was puzzled by the limited number of pews because there was plenty of room for more. I don’t think that’s typical for synagogues, so if someone has a clue please let me know.

We both got our first jolt of jet lag while sitting on the hard wooden benches waiting for the performance to begin. We nodded off several times. During the first few pieces it was really hard to keep our eyes open. But ever-so-gradually, the music drew us in and woke us up.

In spite of my preference for loud, driving rock and roll best suited for wild abandon, I couldn’t help but be moved many times during the performance. The purity of tone achieved by the professional musicians on their instruments was undeniable. Then, as we were drawn further into the songs, we began to feel the emotions sought by the composers.

I didn’t recognize any of the songs until they slid into Queen’s Bohemian Rhapsody. It was elegant and note-perfect. The trumpet especially filled every corner of the big room and hung there, drawing the audience along. I only thought about Wayne and Garth and their buddies singing along once or twice. (Wayne’s World, anyone?)

The night ended with the opera singer doing a rendition of Moon River unlike anything I’d heard before. 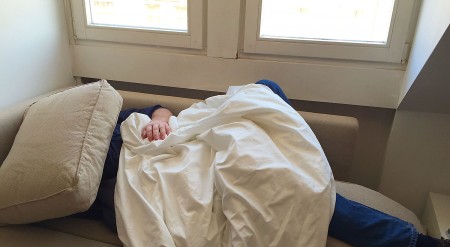 We wandered out into the night and enjoyed drinks and hors d’oeuvres in a nice restaurant that overcharged us, but that was still less expensive than the same meal in Eugene.

Jet lag wiped us out the next day. We woke up, had breakfast, did a few chores, and decided that a little nap sounded good. We woke up five hours later. We were too late to start a new day of touring, so we headed off to the market for grocery shopping. It was time to begin cooking for ourselves in order to slow the money drain.