The Envelope Please: The Bonehead American Tourist Award of 2015 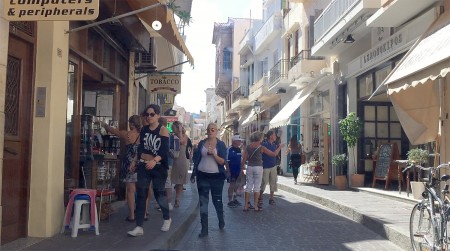 We’re at the Annual Tourism Bureau’s Gala Award Show. A golden man and a bronzed woman, wearing the latest in revealing seaside fashion, are pretending to not care which of them opens the envelope. It’s the fans’ favorite award and the excitement in the room is palpable. It’s the envelope everyone has been waiting for! The guests are leaning over their fois gras and champagne at their round tables of eight. They are making their guesses and hushing each other as the beautiful woman holds the envelope out and rips it.

The beautiful man says: “And the winner of the Bonehead American Tourist Award of 2015, it’s always an American isn’t it? (the crowd claps and laughs), goes to . . . “

She pulls the card out and they both look at the name. She nods her head with delight. He laughs and they share a moment of joy as, for the moment, only they know the winner. She leans toward the microphone and whispers in that husky voice of all tour guides on their fifth group of the day at the Acropolis . . .

“The Bonehead of the Year is CHARLIE MAGEE!!”

The crowd goes wild! Of course! It had to be! Who could forget that YouTube video of them driving in the tiny lanes of Rethymno on Crete? The near miss of the double baby carriage? The backing up of their car past tables of people drinking wine and eating souvlaki? The Enterprise logo in the windshield and rear window as well? Ah, the schadenfreude of it. The “it could have been me. (No, honey, it could never have been you!)”

Geni and I were driving through the mountains above the north coast of Crete. We were loving the white villages, the interlocking of cubes and boxes with arches and barrel roofs that create the infinite variety of an “of course, that’s how you design it” vernacular Cretan architecture, the twisting road on which you drive half on the shoulder so faster drivers can pass you on a curve or when the oncoming cars are also passing each other and you realize that a normal highway really can fit four across at 100 kph, and the sky is brighter than is possible, yet it somehow remains blue, and you know you’ve never been there before, but you feel like you belong.

We were headed for our rental in Kissamos, but to go directly there would mean skipping Chania and Rethymno. I knew we were going to see Chania one way or another, but the moment conspired . . . if we kept going we would arrive too early for check-in; we passed three cars with only our two left tires over the center line because they were driving mostly on the shoulder to give us room, so that was good luck; and a sign said “Rethymno” and the next said “Rethimno” and the next said “Ρέθυμνο” and the next sign wasn’t something I can copy and paste from anywhere I’ve found online . . . the stars were aligning for a quick visit to another medieval Venetian-era village.

Why not? Another ancient old town of twisting streets along a beautiful waterfront. We didn’t bother to stop to look at a map. We decided to follow the signs, the traffic, and go by Charlie Magee’s foggy memory of a month-old glance at maps.google.com that told him Rethmyno had a road that went around the outside of the old town. “If we find an easy parking spot, let’s stop for a quick stroll. If not, we’ll drive around the outside of the walls and alleys and go back to the highway.” Everyone agreed that it was a good plan.

We found ourselves in a slow-moving Crete style road with scooters and motorcycles passing on both sides while the cars inched along and pedestrians watched their asses.

(Three rules of Cretan driving I was coming to rely on:
#1: cars obey traffic lights . . . mostly.
#2: Motorcycles and scooters do whatever the hell they want. While eating a sandwich? Sure. Girlfriend on back, both on cell phones? Why not? Run the red light? Duh.
#3: Pedestrians know they can be maimed at any moment. You can count on them to watch out. Or not. They might stop in your lane for a chat and don’t seem to care that you have to wait for a gap in traffic coming the other way to get around them and they don’t notice that your mirror brushed their shirt. (True story. Repeated many times. You get used to it.) )

The locals began to peel off on the side streets to home and businesses. Tourists kept going downhill. Then, parking signs appeared and tourists turned off. We had reached that now or never point: be a tourist and park where you’re told, or be a local and park where you can get away with it. Charlie Magee chose none of the above. 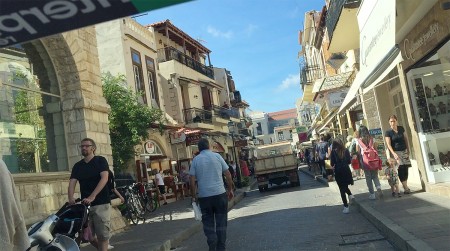 Why did Charlie Magee do that? Because there was a miniature version of a big landscaper’s truck in front of us. That truck appeared to be heading to the street that went around the outside of the old town and along the water. Not only that, but if that truck could fit, our Chevy Aveo was a sure thing. What could go wrong?

The truck turned left where I thought it was going to go straight. It turned into one of the narrow lanes for tiny shops, tall houses, beautiful flowers and thousands of tourists. The connection to the road around the old town was blocked. Uh oh, too late to back up. But that’s okay. I’ll follow the truck. He’s probably going to the other side of town via some tricky way that only a local knows. 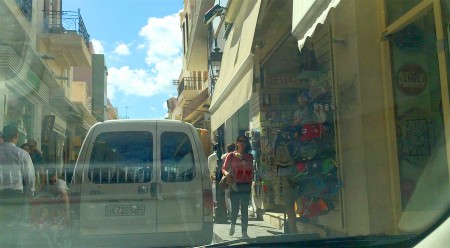 The lane got twistier. It got narrower. It got more crowded. Uh oh. We were the only two vehicles in old town Rethymno. He was getting further ahead of us because he had no problem going 15 in a place I was uncomfortable going 2. We were driving inches from people sitting in chairs at restaurants. Shoppers were looking at us like “what the hell?”.

The truck was a block ahead and he made a 90 degree turn next to tables of diners and a shop. People had to move their chairs to let him past. There was no way I was going to turn there. He had gone up onto a sidewalk and driven next to homes and into what appeared to be a public square and park. Of course! He was the city landscaper and he could go wherever the hell he wanted!

Twenty feet past where he turned was a T intersection. To the left was one way coming toward us. To the right was our only way, but it was a tiny lane and an S turn. The turn was so tight I worried that the tires would rub on both sides. We came out of the S to see a long skinny lane ahead of us. It was the busiest shopping lane of old town Rethmno. The sidewalks on each side weren’t wide enough for two people side by side. The curbs had bollards on them so that you couldn’t park a car partway on the sidewalk. The lane was filled with people.

They were looking at us, walking around us, ignoring us, wondering what the hell was the Enterprise rental car doing there.

“Oh my god, oh my god,” said Geni. I think I said holy shit a number of times.

We had become surrounded by shoppers and diners. I put it in reverse and did 1 kph backwards around the S turn until I reached the point where the truck had turned in. We went up that sidewalk and into the square. Yep, it was a city square. It was a park. The landscaper was nowhere to be seen. 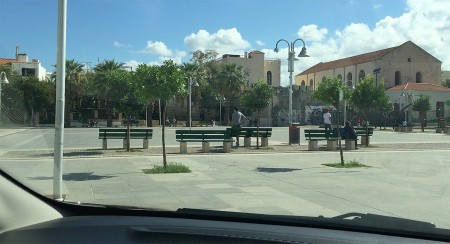 We were in a beautiful square paved in concrete and rows of tiles, with beds of flowers, shrubs and small trees here and there. Kids were playing soccer. Lovers were sitting on benches making out. Workers were carrying building supplies into a house. The square was surrounded by ancient homes with recent paint, with old sculptures, with tiny gardens, with old fences, and dogs and cats here and there. It was a neighborhood tucked in behind the tourist lanes. It was the place you wished you had grown up. But you were the idiot in the Enterprise rental car.

Strange thing though: nobody seemed to notice, or care, that a rental car was off to one side with the engine running and two American tourists freaking out in the front seats. It was as if it made total sense that a tiny car was idling on ancient limestone pavers.

We spotted the landscaper’s truck. It was down another narrow lane and backed up to a nearby house. The driver was nowhere to be seen. Geni hopped out to check out a possible escape route through a big arch between two houses. If it was good, we’d have to drive through the kids’ futbol game, but it looked closer to the outside of town than the inside.

While she was gone, another truck drove in and parked not far from us. Geni ran up with a “no-go” on the escape route. She ran over to the guy in the other truck. He didn’t speak English, but he recognized our predicament and, with a waving of hands, told us to follow him. He would lead us out. Yay!

Guess what? He went out and turned into our famous S turn. He drove 3 kph and people got out of the way. I kept as close to his bumper as I could, but I finally had to give up space when confronted by a double-wide stroller pushed by an irritated Grecian mother. He pulled away from us. But we caught back up when a motorcycle cop made him turn down a lane he didn’t want to go. Guess who also obeyed the motorcycle cop?

(If you look close, you can see the cop in the white helmet to the right of the back corner of the van.) The guy we were following got farther and farther ahead because he had more experience in knowing that the pedestrians would move the hell out of his way. I didn’t and the shoppers and scooters took advantage of me every time. We finally lost track of him, but we had no choice. It was either keep going or wait until midnight. 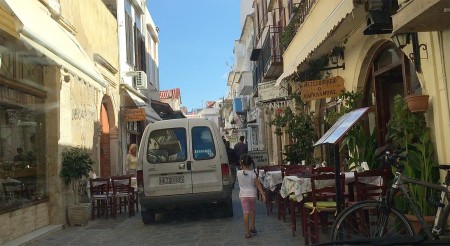 We ultimately lost our leader but came out onto the road that went along the harbor. We pulled over for a moment to let the adrenaline drain. Holy Shit. I deserve that Bonehead Tourist of 2015 Award. Where is my damn trophy?