Home Travel Greece Crete Where the Hobbits Go for Vacation

Where the Hobbits Go for Vacation 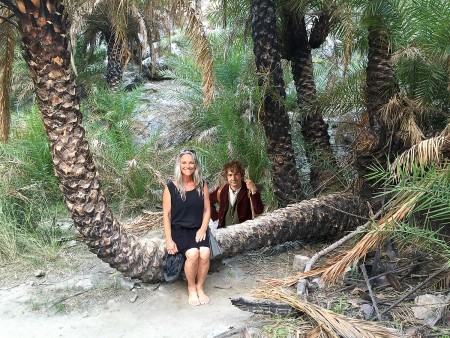 When Bilbo and Frodo need a break from fighting orcs, they’ve got a favorite place they take their girlfriends Nillo and Jaylo for vacation: Preveli Beach and the Palm Forest.

After our idyllic lunch next to the stream, we hopped in the car for what we thought would be a few minute drive to the beach. We knew it was only a few miles away and that the river made its way through a narrow gorge. My assumption was that the road would parallel the water and we’d be there in no time. Wrong again. 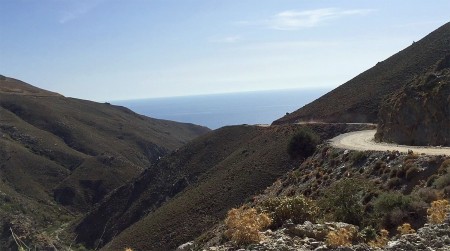 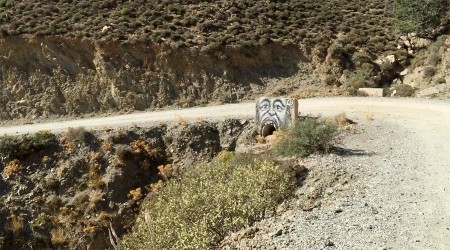 The road climbed and climbed some more. I began to doubt we were going to the beach. It was another gnarly, narrow Crete road. No big deal, really. We’ve traveled many roads like that in the West U.S. But usually in a 4WD pickup.

We were driving an itty-bitty Chevy Aveo on teeny-tiny tires. I had overpaid for insurance, so I wasn’t worried about damage, but I had my fingers crossed about not needing to change a tire on a one-lane, steep road with other tourists trying to sneak by, and locals barging past. 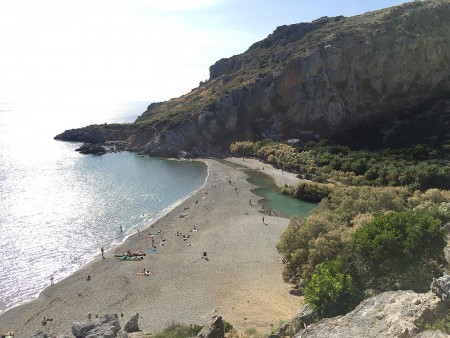 No problem though, and we made it to the huge parking lot at the bottom of the road. There was a big beach there, but not THE beach. For the beach everyone wants to visit there is a five to ten minute hike up and over a shoulder of the mountain. It’s narrow and filled with people speaking funny.

We got behind a big family of Greeks—mom, dad, uncles, aunts, kids, cousins, two grandmas and one grandpa—and, even though we couldn’t understand a word, we pretty much knew the conversation. “Oh, it’s so beautiful!” “No running on the trail!” “Giorgios pushed me!” “Dimitra pushed me first!” “Did someone remember the sausage?” “Who’s got the wine?” “Oh, it’s so beautiful!”

We walked straight to the water and I did my best not to stare at the bare-breasted young women. We waded toward the far, non-nude end of the beach, and looked for a shady spot for Mr. Too-White Magee to hide in. We saw a palm with no one under it so we walked across the beach, through the river, and into the first row of palm trees.

It was one of the few empty shade spots near the river, although there were plenty of empty tables under the trees next to the beach taverna. We still had our own beer and wine, so there was no need to spend money at the taverna, inviting as it was. We found one palm perfectly sized for me and our stuff to shelter under while Geni went for a swim.

A family of geese came from upstream somewhere and marched straight to the trees near me. They found a spot filled with towels and miscellaneous people stuff, but no people, and started poking around in it. Then they moved on to the next, people-gone-swimming spot, and started poking around in the bags of food. Within moments, plastic bags, previously held down by the weight of food, were now blowing in the wind.

Geni came back from her swim just as some crazy Greek guy walked toward the geese with a chair and tried to herd them back to the river. He was showing off to his friends and trying to be funny. Boss Goose got pissed and tried to attack him through the chair. It was hissing and squawking, wings spread and flapping. If that chair had been flesh it would have been bleeding. The guy was definitely caught by surprise. He thought the geese would run for their lives.

Mr. Macho was in a spot now. Everyone sitting under the trees and at the taverna was watching him. He couldn’t back down without losing face. Every one would laugh at him for being defeated by a goose. So he tried to advance on the goose with his chair.

The goose didn’t give a shit. It kept trying to get around the chair and get after him. The guy worked at it for a couple of minutes, putting in the time required to prove to everyone he wasn’t afraid, trying to show he wouldn’t be defeated by the damn goose. Instead of backing up, the goose kept trying to do an end run around the chair to get to him. The guy ended up saying some lame joke in Greek (his friends laughed at something he said) and then he backed away and put the chair down.

Again to Mr. Macho’s surprise, Honcho Goose kept after him. He had to grab the chair again and he backed up faster to the sound of much laughter from friends and strangers. He kept the chair in between him and the goose while backing up.

A natural goose-safety-limit was finally reached and the goose turned away with a final hiss. It rejoined its family at the free food zone. They poked around in the food bags for another minute, to prove they weren’t fazed by the macho human, and then they returned to the water.

After the tail end of the event-spectaculaire (sorry, no pictures. I was laughing too hard and didn’t think of it), we headed into magic-land, fairy-tale-land, where-hobbits-vacation-land. 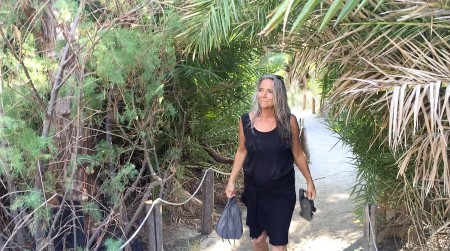 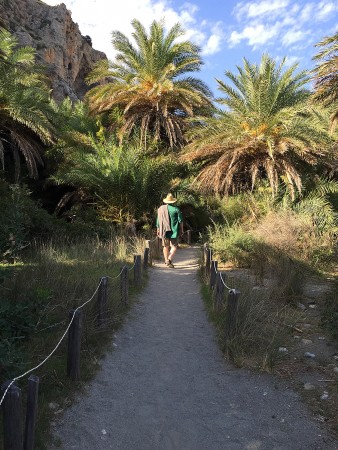 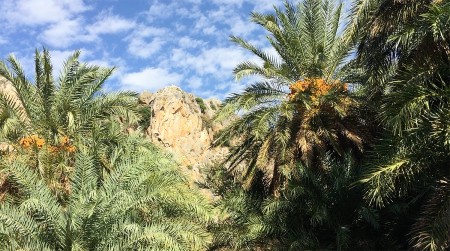 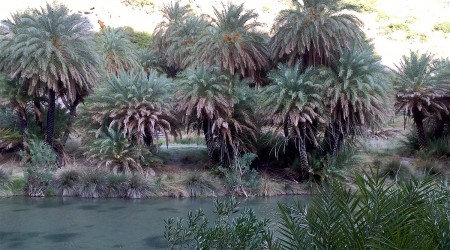 I’ve been to many tropical areas in my life and seen a lot of palm trees and rain-forest undergrowth. Most palm groves I’ve walked in have the big, fluffy tops at about thirty of forty feet in the air. You feel like a bug walking under rows of sprouts because there is only green up at the top. 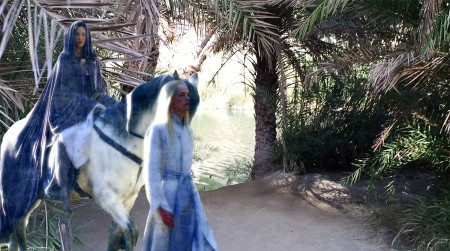 The Palm Forest was filled with palms that had huge, fluffy heads—so far, so same—but the difference was the range in heights. Some were no taller than me, many were the height I expected. The result was the feeling that you were walking inside the palms. It was dark in places, you could heard the water nearby, the path curved this way and that . . . soon, you knew you’d stumble on a hobbit family having a picnic, or hobbit teenagers making out, or elves tossing dwarves into the air to see how big a splash they would make. Any second now, we were going to hear their tinkling little voices in yet three more strange languages.

But we wouldn’t have been surprised. We would have said, “Of course. Where else would the denizens of the Shire and Lothlorien go for vacation?”

Did you know that Santorini was once a big volcano? It’s the nearest big island to Crete. It blew up in 1613 BC and wiped out a lot of the Minoan civilization in this area of the Mediterranean. It’s sometimes said that Santorini was the center of the lost civilization of Atlantis. So it makes sense that the hobbits and elves, co-founders of Atlantis, would return to their old vacation spot on nearby Crete, as one of their few touchstones on a planet overrun by humans. If you look carefully at my photos, you’ll see I have proof.

We wandered along the roped-in path. The walls of Kissano Faraggi Gorge closed in overhead. The ropes were to keep the thousands of annual tourists from trampling the pristine palm forest and the edge of the riparian area. The ropes didn’t do much good. Every spot that had an opening to the water was trampled and we saw many people crossing back and forth over the rope as we hiked uphill. 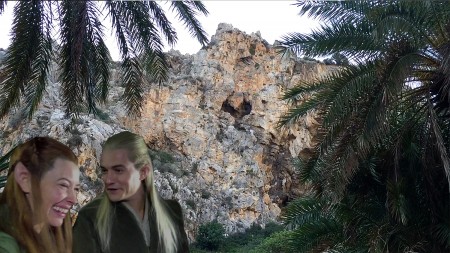 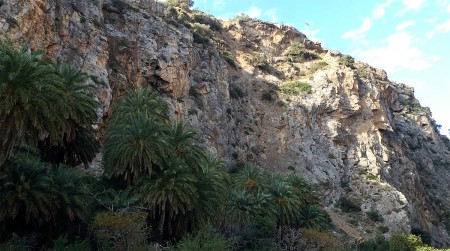 The trunks of the palms all had a burnt look to them and we found out later that there had been a fire in 2010 that destroyed the forest. The locals feared that the forest was destroyed but it rejuvenated itself in less than two years.

After less than a mile, we passed some sort of lazy-tourist demarcation line and found ourselves mostly alone. Soon after, the ropes ended. We hiked a bit further up, toward the sound of waterfalls. When it sounded like we were near the falling water, we followed a tiny trail through huge boulders to the waters edge and found our personal center of mystical Cretan wilderness. The gorge walls loomed overhead. The river was littered with huge boulders that had fallen from the cliffs above. The water streamed and churned and dropped off many short walls of rock, and filled pools both large and small. 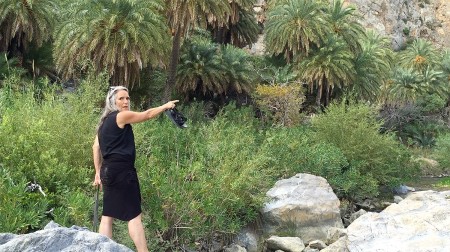 Geni and I plan to return someday. We will bring sleeping bags, a tent, local foods and wine . . . and floaties. We will spend a few days above the tourist demarcation line, floating on the water, reading books and drinking wine. We will venture to the beach for swimming in the sea, and for using the WC. We will dine out at the beach taverna and we will tip well. We will say Hi to the hobbits for you.

But first we had to leave. So we departed a different way than we’d come in. On a gnarly, one-lane dirt road that threatened to toss us into the sea. Perfection once again. 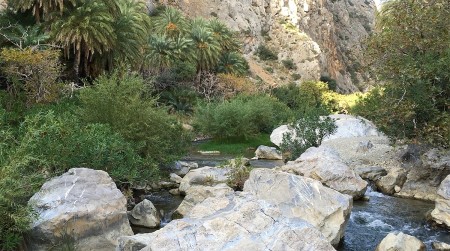 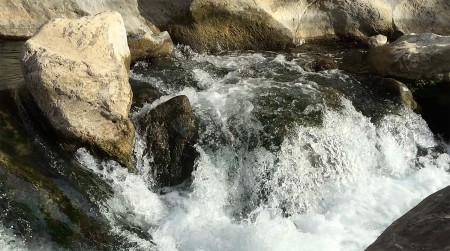 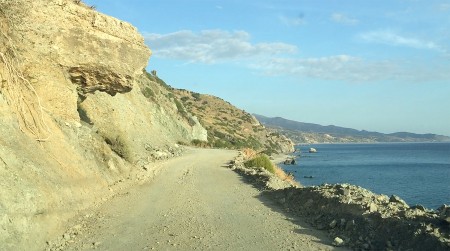 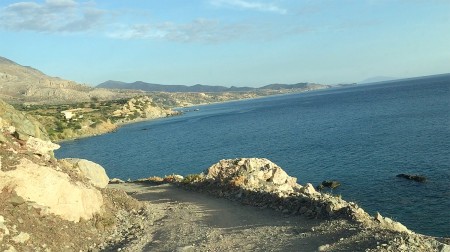