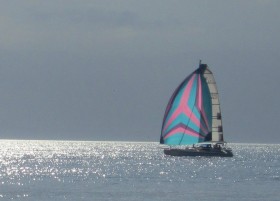 Varakai was our amazing sailboat for many years. But it became more important to spend time with kids and grandkids, so we sold her and she’s sailing in San Francisco Bay. I’ll leave this page up in case you’re interested.

The Photo Gallery is a random collection of shots.

A Short History of this F-27

She was previously known as “Flying Bye” and the original owners were Tom and Debra Emery of Sacramento, California. Tom bought her to race on San Francisco Bay and he installed the standard go-fast gear that many F-27s carry: bowsprit, asymm spin, screecher, double-spreader rig, barberhaulers, and aft cabin beam post. She was kept on the hard in Oakland or in their RV garage at home.

As the years went by, Flying Bye became more of a cruiser and that brought the addition of a 120w solar panel, hotel-sized minifridge, dodger, bimini, and Autohelm with remote control.

That’s the boat Charlie and Geni purchased and renamed Varakai. They haven’t had to do much other than sail her and keep her protected from the Oregon winter rains. Charlie raced Varakai occasionally on Fern Ridge Lake, but mostly we cruised her on Fern Ridge, Clear Lake California, and the San Juans. We don’t want to sell her, but the opportunity to be part owners of Malihini, a Shuttleworth cat, was too good to pass up. 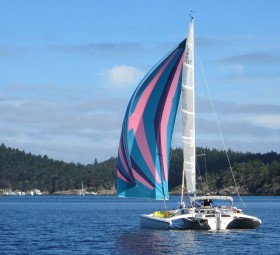 Asymmetric spinnaker: very good condition, has had a couple of patches 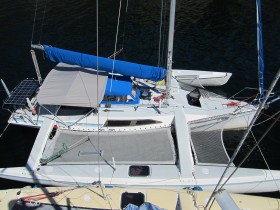 Bimini: some wear on the cover, very good condition

Tramps are in very good condition

Honda 9.9 engine: runs great . . . will be getting a tuneup in the next few weeks

120amp solar panel; also has the original solar panel (hiding under the big panel). No idea if it’s generating anything.

Excellent CD/Tuner stereo with amplifier; speakers inside and out

Has slide-in table for saloon meals

Has Inserts to make galley and settees into double bed 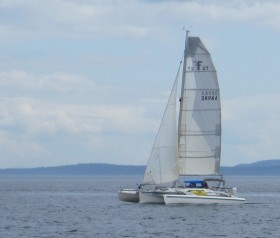 Older Garmin GPS; never used it because it is so slow at finding satellites and to gain more headroom in the starboard settee

Icom Radio works great but we accidentally broke the stern mounted antennae while bringing the mast down at the end of a trip.