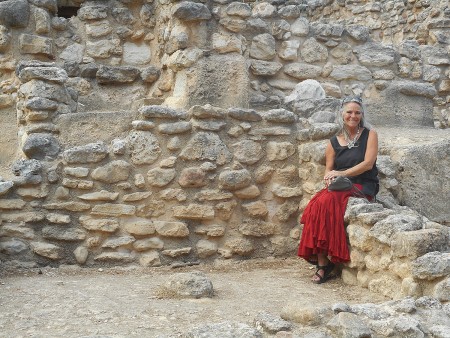 Or, Who Gets to Interpret the Past?

It turns out that, like most any field of human endeavor, there are factions within the archaeological community. Some say the limit is to dig up the artifacts, clean things up, put them back in place for viewing. Some say it’s okay to dig it up and try to rebuild it as it once had been. There appear to be more on the side of the former.

Sir Arthur Evans was in the latter camp and he’s the one that got to call the shots at the Knossos Palace in Crete. Starting in 1900, he and his teams spent 35 years revealing the ancient ruins and doing their best to rebuild sections of it with educated guesses at what it had been like. Many archaeologists disagree with his interpretations but, too late, his work is there. I’m sure there were heated arguments in the plush chairs of a few British drawing rooms. Perhaps tea was spilt. 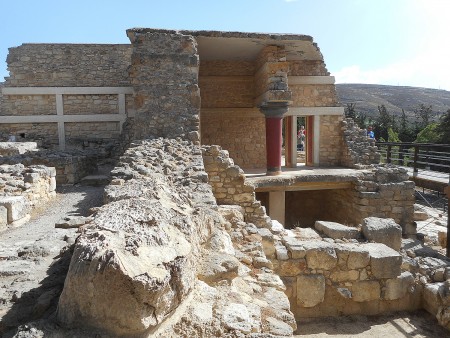 I’m going with Sir Art on this one, though there are definite, visible pluses and minuses. First, they left most of the 1300 room palace untouched, so the leave-it-alone camp has plenty to look at. Evans and team didn’t paint columns with fluorescent pinks and yellows, they used the colors that were known to have been used in that era and that area.

Unfortunately, some of their concrete work was not so great and hasn’t held up as well as the work done by the original builders 3700 years ago. So now there are places with metal rods and industrial scaffolding holding things up. There are places you can’t go because they’re afraid something might fall on your head. They are gradually “fixing” things with current concrete technology. How long will that hold up? 3700 years? 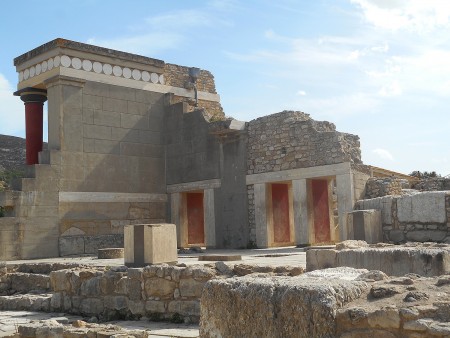 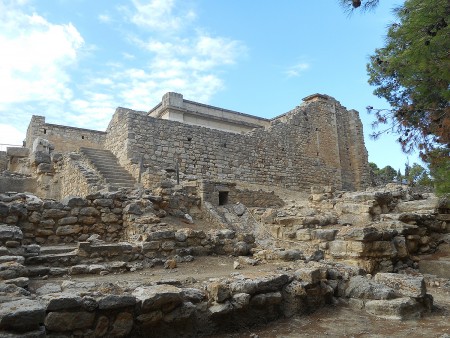 One of the drawbacks to the restorations was that it was often hard to see where ancient ended and restoration began.

We headed for our first info plaque and accidentally met a German couple. Geni and I were reading the plaque together. I’m a fast reader, so I finished and stepped away to look closer at something the plaque had mentioned. A German couple filled my space, but Geni hadn’t noticed the switch and she turned to the husband thinking it was me. First she put her hand on his arm and leaned into him. Then she began talking and looked up at his face in the middle of a sentence. She jerked back: “Oh, I’m so sorry.”

It had happened super fast and I’d managed to see the whole thing. The German couple thought it was hilarious. The husband thought he’d been about to get a big kiss from his new wife. We all had a good laugh over it and then they wandered off. We had a similar pace as them during the tour of Knossos and kept bumping into them. They tended to be ahead of us and seemed to be getting personal thrills from tipping us off on especially nice things to look at around the corner. 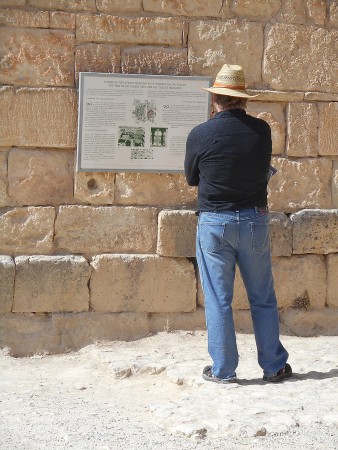 But that was the rare “happy” plaque event. In general, plaque etiquette is non-existent. The plaques are big enough for 4 to read comfortably side by side at a distance of a few feet, or 6 people a bit scrunched together. But that’s assuming you leave that much space if you’re the first one there.

If we walked up to a plaque that didn’t have anyone standing in front of it, we left enough room for another two or three people to read along with us, if they so desired. We were caught by surprise at the number of people that decided that the three feet of space we’d left was perfect for them to belly up to the sign and completely block us and anyone else that might want to read it. We would literally be reading the sign and people would walk in front of us as if we didn’t exist.

Kids did it and adults did it. It was almost always a northern European or an Asian. Never a Greek. I’ve gotten very mellow with my years, so I didn’t react in a noticeable manner, though once I voiced a single, loud “EXCUSE ME” to a teenage Swiss girl who stepped directly in front of me. But I only did that because her dad had already forced me sideways by barging and I was irritated at him. They both acted surprised and she apologized and took off.

But the barging happened over and over and I developed a method of dealing with it. (Feel free to borrow my technique.) I didn’t shove anybody. I didn’t even growl or harrumph. But I got good at moving forward or sideways and crowding someone’s personal space to the point that their inner discomfort forced them to move over or head out. Nobody was going to stop me from reading the plaque. 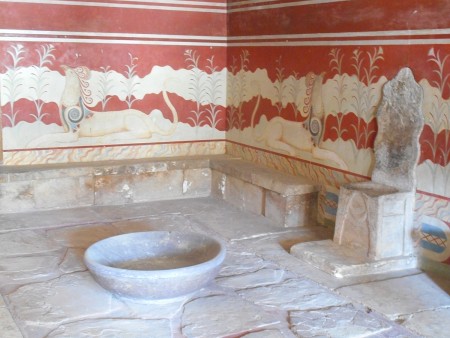 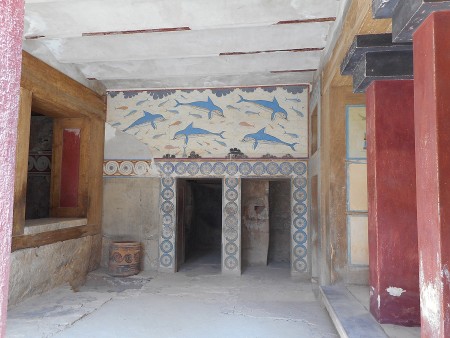 We roamed around, doing our best to avoid the flow-killing groups, and tried to imagine what things might have been like thousands of years ago when this was the center of a city with 100,000 citizens. The palace had had running water, a sewage system, and a storm water runoff system. In fact, the Queen’s megaron (area of the palace) contained one of history’s first flush toilets. 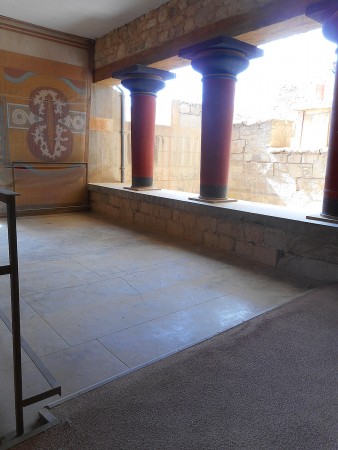 The main reason I’m glad Sir Art and his gang did their thing is that instead of nothing but piles of rocks that used to be walls, there are a few rooms to walk into. You can feel the spaces. You can react to the decisions of ancient architects. You can hear your voice echo off walls and ceilings. You can get a sense of what it would be like to sit around with your friends there on a hot summer day. Of course, you would have had to have been the Queen or the King or one of their best friends to have experienced the spaces back in the day. It’s not like any old wanderer could have hung out there.

My favorite spot was a three story stack of rooms. The rooms surrounded a light and ventilation well that started with basement level rooms and came up to what we would call the third story. It was a hot day but the design of the rooms caused the hot air to rise, which pulled the cool air up from the basement level. It felt like an air-conditioner was blowing soft cool air across our skin. According to a tour guide I overheard, this technique had been used extensively throughout the palace. 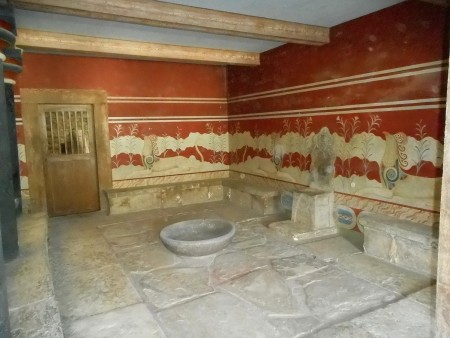 Another interesting room was called the “Throne Room” though there is disagreement about whether it really was the King’s throne room. There was a throne found there, but the seat is shaped for a woman’s buttocks, so they think the Queen might have held court there OR it could have been the room reserved for worship of a female god. There are beautiful paintings of gryphons on the walls of the room.

One of the largest sections of “restored” rooms is the Queen’s set of rooms. The main room has paintings of dolphins on the walls and it is the biggest room of any that we saw.

The Knossos Palace is extensive and we felt like we had rushed it, though we spent 2 1/2 hours wandering unguided. It didn’t feel as ancient as Phaistos had to us. Perhaps because we’d already experienced Phaistos. Perhaps because there were so many people there. Perhaps because Sir Art had changed it too much.

No matter, it was fascinating and impressive. Much that underlies our culture in the United States stems from the decisions of the people that lived in Knossos over 3 thousand years ago. 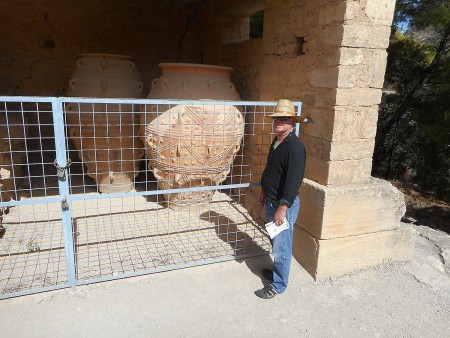 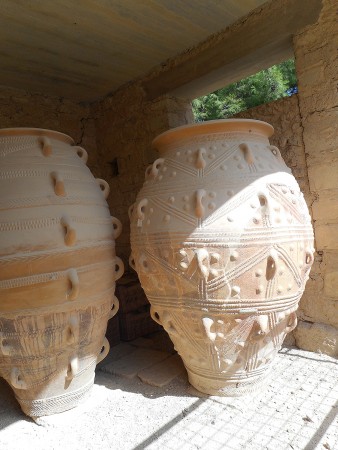