Home Travel Prague Prague Is Too Inexpensive, Something Must Be Wrong

How do they do it?

How do the people and businesses of Prague manage to keep the prices of everything so low? Is it because they live in some fairy-tale land of make-belief and they haven’t noticed that it’s not possible to make a living when charging so little for so much? Or is it because we’re from America and we’re blind to the fact that we’re all so busy trying to retire early that we’ve established a society based on overcharging each other and we don’t notice anymore? Sociologists, prepare your briefs. We will discuss upon our return.

Almost everything we’ve done here in Prague for the past four days has resulted in bills that are too low to be believed. I’ll make some comparisons between Prague and Eugene, Oregon, USA so that you have data for your Ph.D. theses.

For the cab rides, it has to cover vehicle purchase, maintenance, insurance, gas, and labor.

We took one yellow cab ride, and an Uber ride to check prices. Uber is easily 1/2 the price, so it’s been Uber all the way, even though we’ve had to wait as long as ten minutes for the driver to arrive, while watching numerous yellow cabs pass by.

Bonus tipping surprise: the Uber drivers get flustered, then embarrassed, then grateful when we tip them. And that’s in spite of the fact that we’re still struggling to understand the coins. The smallest bill here equals $4.15, so they use a lot of coins. It turned out that some of our tips were about 10 cents and some were about 3 dollars, and the surprise and gratitude didn’t seem to be any different. We’re getting better at the coins, so our tips are making more sense. We’ve settled on a minimum $3 tip because it can’t be possible for the driver to pay for gas and still have money left over to bring beer and bread home to the wife. (Yes, every driver has been male.) 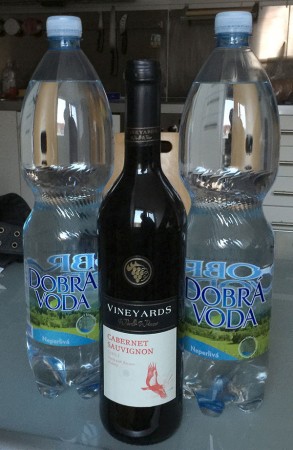 Tipping depends on where you go. We’re told that most places price their meals with a 10% tip charge already added in. But that’s not always the case, so it’s a good idea to see if anything is mentioned in the menu or on the receipt. In general, waiters and waitresses are surprised and grateful to receive a tip . . . if you’re in a small, neighborhood place. The closer you get to the main tourist areas, and the fancier the place, the less surprised they are and the more they seem to expect it. Kind of obvious, right?

It can be hard to tell, though, if you’re entering a “fancy” place because the majority of the restaurants are in the middle of the block, with few to no windows, and it’s rare if they have outdoor seating. Sometimes you can get a clue by how they display their menus outside the door. Are they paper behind glass? Laminated sheets on a podium? Colored charcoal on blackboards? All English? Mostly Czech?

A more obvious clue is the clientele coming and going. Deciding if they are tourists or locals is the primary determination as to cost. Trying to figure out fashion doesn’t help much because nobody is shabby around here. From kids, to teens, to adults and elders, everyone is looking pretty sharp. Not overdressed though. But newish jeans and shoes. Nice jackets and scarves.

Even the few homeless guys with hats out, and there have been very few, keep themselves in better shape than the ones on the streets of Eugene. I even saw one very old guy look himself over in the reflection of a store window. He tucked his shirt straighter, and tugged his belt buckle closer to the center, and patted down his hair. Then he dug in the trash and pulled out what looked to be a bag of restaurant take-home that a tourist didn’t want to lug around. He opened it up and got a big smile. Then he closed it and hustled off.