Home Travel Greece Welcome to Crete. Did You Bring A Seatbelt?

Welcome to Crete. Did You Bring A Seatbelt?

The car rental guy in Zagreb, Croatia told us not to worry about where we parked. “Croatia is a very safe country. No one will trouble you anywhere. Have a good time visiting us.” Well, hey, thanks man. Sounds good to us. We got used to the fast drivers that trusted you to be as good of a driver as they were. We figured out the signage, more or less. I only got one speeding ticket.

Crete was a different story.

It had been a long day of flights and sitting in airports. We arrived in Heraklion, Crete, Greece around 9pm. The rental car guy said: “Careful where you park. Nothing valuable left in car. If windows broken, you pay. Money come out of deposit. Some places not good.” Uh oh.

He waved his hands a bit, “left over there, go the roundabout, left again,” and he walked away. I then proceeded to go exactly the wrong way. We ended up on the biggest freeway in Heraklion. Much the same size as many divided, four lanes each side, freeways in the big cities of the U.S. We began looking for signs to the city center or the harbor or downtown Heraklion. 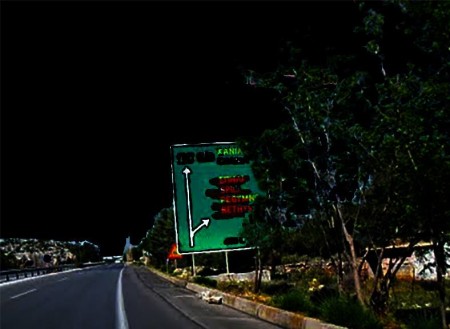 We saw a big sign coming. But tree branches covered most of it. The light above it was broken. All the words on the sign had been painted over in black spray paint. What the hell??!!

We’re in the middle lane going 70kph. Cars are passing us on both sides. The next sign has the lights broken out and the words painted over. Same with the next sign. We’re heading into the mountains, which I know is the wrong way. We see a sign that isn’t completely painted over in black. It’s in the Greek alphabet. An alphabet that has been in use since the 8th century BC. It is the ancestor of the Latin alphabet, the one you’re reading here.

The next sign had a bit more showing. The top line was Greek. The second line a different style of Greek, the third line was English, but mostly obscured. The next sign we saw the complete English name for the first time. “Iraklio.” Geni glanced at a map. “I thought we were in Heraklion.” “Yeah.” “I only see Iraklio.”

(It turns out that the geniuses who translated Greek to English, and then passed their versions down through history into Google and blog posts and Wikipedia, didn’t bother to ask the Greeks how they transliterated their town names. None of what you read in an English version Google search matches with what the people in Crete put on road signs, maps, menus, etc. I hope those British translators of times past are wandering a hell of signs that they can’t read.)

I took the next exit, no matter what the sign said. My goal was to head back downhill, and aim slightly west. We soon entered Insanity 101 for Western Drivers.

We were on a two way street with parked cars on both sides. A motorcycle passed on our left, between us and a car coming the other way. A scooter passed on our right, between us and the parked cars, where I was sure there wasn’t room. We came to a red light. Motorcycles and scooters went around us on both sides, slowed very slightly, went through the red light. Pedestrians walked every direction. In front of us, behind us, behind one scooter, in front of the next motorcycle. While holding hands with kids. And eating ice cream cones. And, pretty much, not looking.

The red light became two flashing yellows. I hesitated and got beeped at. Went through. Motorcycles and scooters on both sides of us, both sides of cars going the other way. Motorcycles coming the wrong way out of one way streets. Cars tried to pass us!! It was dark out. There weren’t many streetlights! They rarely beeped their horns.

Someone stopped ahead. He turned his flashers on. He got out and went into a bakery. No one beeped. We all waited for a break in the oncoming traffic and went around him. One guy did that and left his door open! Hanging out into traffic while he went to get a newspaper or a bottle of water or to kiss his girlfriend. Who the hell knew?

Think of it this way: on a normal two-way busy-ish street in the U.S. you’ve got about 8 things to pay attention to: the car ahead, the car behind, the car oncoming, the car turning left, the bicycle waiting at the side street, and three pedestrians. You only really have to worry about the car in front of you and the car turning left.

In Heraklion I was suddenly enmeshed in needing to pay attention to about 40 moving objects. All moving in different directions, at different speeds, and operating within no obvious set of rules. I needed to learn the rules ASAP or damage would be done. Oh, and we were lost. Oh, and the streets were getting narrower. Oh, and the streets began to come in from every direction instead of just left and right. Oh, and some intersections involved 5 or 6 streets, some one way, some two way, some 6 way if you count the invisible lanes the scooters and motorcycles were using. Oh, and the street signs were in Greek, when there were street signs.

Did I mention that the motorcycles ignored red lights? And they ignored one way signs?

Did I mention that families and the elderly were moving within this nest of death-at-any-moment?

I stopped at a roundabout, parked halfway on the sidewalk like everybody else and went to ask for directions at a bakery. Geni insisted that I lock her in the car.

The woman at the counter spoke a little English, but I soon realized she couldn’t read. I showed her a street map written in Greek and she turned it upside down, then sideways, trying to figure it out. She called for help. The baker walked over. She knew where we were. She knew where we were trying to go. But she didn’t speak English and she shook her head and said something real fast. Her friend translated: “She knows where you want to go, but can’t describe how to get there. She says you are only ten blocks away. Head downhill mostly and to the left sometimes.”

I was so tired, so filled with adrenaline, that I laughed all the way back to the car. I got there and some guy had parked in the lane of the single-lane turnaround. His flashers were on, his door was open. He was nowhere in sight. Geni wasn’t sure, but she thought he had gone into the bakery. I had to back up the wrong way on the turnaround and wait for a gap in traffic to get back on the main street.

Did I mention that time elapsed has now been fifteen minutes? Fifteen minutes that made me feel like I had played a full game of racquetball.

This went on . . . this paying attention to 40 fast moving objects for another 45 minutes before I found our hotel. I had to park illegally, like everyone else, because the street in front of the hotel was under construction.

I walked inside and the clerk had no record of our booking through Travelocity. The hotel was full. All downtown hotels were full.

My Magee brethren will be proud of what happened next. My face didn’t turn red. My eyes didn’t bulge out. I didn’t speak loudly in English to a young Greek woman who had nothing to do with my problem. I put my head on the counter and laughed quietly. I looked up and said, very softly: “Nothing? No rooms?”

I must have looked devastated, because she said: “Give me ten minutes. Someone might have canceled that I don’t know about.”

I went out, filled Geni in, grabbed the laptop so I could contact Travelocity while using wifi in the lobby. I went back inside and she wasn’t rattling around in the hotel database. She was reading a novel. I came within an inch of Magee anger. I controlled it. I sat down and tried to contact Travelocity. No good. A man showed up and he had a quick conversation with her, looking back and forth at me.

“We have a room,” he said. 55 euro. I paid. I got Geni. We walked in with our stuff and he stopped us. “You didn’t tell me for two persons! Is only single bed!”

“We’ll take it.” We paid for the second person, discovered that a single bed in his hotel was a double, took showers and went in search of food and drink.

Sorry there are no photos of the insanity but we were freaked out and it took both sets of our eyes to keep from killing pedestrians. The single attached photo is a real sign, but I did a night for day switch in Photoshop. As you can see, the painted-over words weren’t visible until a moment before reaching the sign.