From Gritty to Spectacular 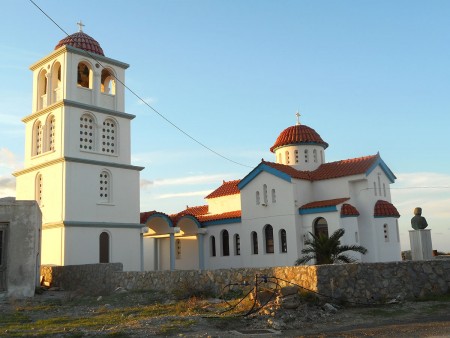 We’ve discovered that the small, non-tourist towns on Crete tend to be like miniature Heraklions. They’re a bit gritty, definitely local, and a mix of modern, ancient, and abandoned . . . often next door to each other.

We ventured the few miles from our place on the water to Kissamos for coffee, gelatto, and groceries. I wouldn’t recommend this town as a necessary stop on a vacation, by any means. For us, though, it was close to a room we found on the water.

In town, there was a sparkling, modern-design, women’s fashion store, with the latest styles Geni assured me, next door to a run down auto parts store next door to an abandoned house next door to a nice house with recent paint, glistening shutters, and with beautiful flowers and vines.

Kissamos is listed as having a population of about 8,000 but, as always in Crete, seemed like many more. There is a five block strip on the main street that seems to have 1/2 of the citizens rushing back and forth at any given moment. It’s a miniature Heraklion with the traffic.

Cars double-park, turn their flashers on and go shopping. Nobody cares. People patiently wait for a gap to get around. Nobody beeps. Motorcycles and scooters rush by from all five directions. (You thought there were only two directions? Ha! You know nothing of Crete!) Pedestrians wait for the perfect moment to cross. I try to stop for them every chance I get, just to see the look of surprise and thanks on their faces. The gratitude is most evident on little old ladies dressed completely in black, and on the faces of moms with kids. Some of them don’t believe and wait me out. 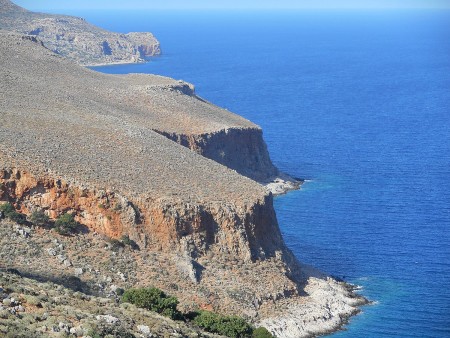 Kissamos is at the southern end of a bay between the “horns of west Crete.” Look at Crete on a map and you’ll see what I mean. There is a 15km drive up and over the steep-sided westernmost horn, on a gnarly rock and dust road with no railings to the “must-do” beach called Balos.

After a longer than expected drive, you end up at a parking lot on the ridge above the beach. It’s a good, steep hike to get down to the water. Most of it is on steps mortared into the hillside, but OHSA would not have approved of the variation in tread width and riser height of the steps. Watch where you’re going because it would be easy to fall.

We got a late start and there were a lot of people coming up the hill toward us. We were among the few still going down toward the eight hundred shades of blue water below. 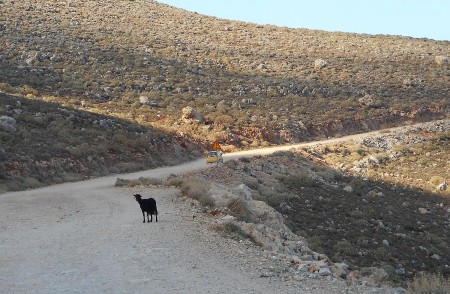 Balos Beach is a skinny strip of sand from the mainland to a small island. There is water on both sides of the strip and it’s shallow for a long way out; that’s what creates the variety of colors. It’s your classic European beach scene of sun umbrellas with two recliners per umbrella for 6 euro a day. There were a few topless women, but not enough for it to be called a “nudist” beach.

There were families there from all over Europe and many from Crete as well.

Pause for digression. I have entertained myself on this trip with a social science experiment by saying Hi and Hello and Bonjour and Guten Tag and Dobar Dan and Kali Mera to people as we pass them. Sometimes I simply nod. It’s especially fun to do it on trails. 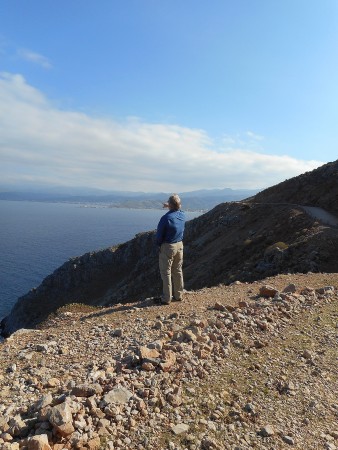 The Germans absolutely hate it. They refuse to look at us and you can see their faces tense up at the sudden, unexpected invasion of whatever is going on in their mind. Especially the men. I can tell they think I should be arrested or slapped. The women want to respond, but they don’t.

Scandinavians tend to be surprised and look at us, but only once in a while do they say hello. The French enjoy hearing Bonjour and once a French woman beat me to it. (I’m mostly guessing at the language and I usually stick with Hello because I don’t want to be too much of a smartass.)

Croatians are quick to say Dobar dan, and Cretans are quick with Kali mera, though a small percentage of Crete/Greek men tend to glare or give me stinkeye. I have a hunch they think I’m German (blonde hair, blue eyes) and that’s a trigger for many here. The Cretans put up more resistance to the Germans in WWII than the Germans liked, so they went cruel with their punishment. (Not nearly what the Jews suffered, of course, but the Cretans haven’t forgotten.) And recently it’s been the Germans in charge of the EU and disciplinary action with Greek debt due to the economic collapse.

I’ve stopped my Hello game because there’s no need to put people on the spot like that. I gained my info from the social science experiment and that was enough. 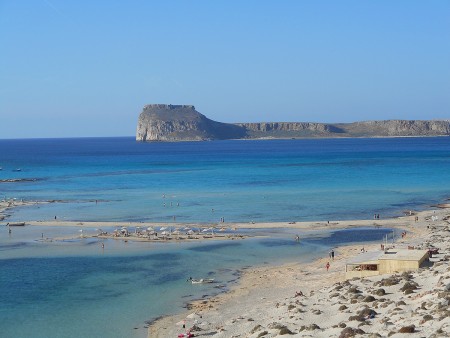 Where was I? Balos is as beautiful as advertised and we went for a swim. Then we waded around for a while and watched kids and parents play in the water, and watched couples walk hand in hand and watched a couple of umbrellas tumble in the building breeze. The hike back was quite a bit longer, but we paused and turned often for the view.

The best part of that day, however, was the taverna we stopped at for dinner. It was twilight when we got back to the pavement in the tiny village of Kaliviani.

There are two restaurants across from each other on the narrow road. (One car width at that point.) Quite a few cars were stopping for dinner at the same time, and most people went into the place on the east side of the road, overlooking the water. It was a bit fancier looking and there were many people already sitting at tables inside and out. The other restaurant had an elderly local man at a corner table outside, and two little girls at another table doing their homework. Guess which one we went to?

I must digress again. We were suddenly seeing a pattern on Crete that held up everywhere we went. Many of the restaurants were family operations. Dad was out on the sidewalk encouraging passers-by to sit down. Daughters were the waitresses and/or in the kitchen. Sons and sons-in-law were in the kitchen and/or cleaning up and/or were the waiters. The kids were at tables doing homework, or sitting at the bar watching the Disney channel in English because the Danes at the center table had stopped watching the futbol game in favor of staring at the water and, after a brief argument, grampa caved and switched the channel for them. Nobody in the place complained. The food was too good.

Back to Kaliviani. We sat down in Agarathos Restaurant (not to be confused by the busier, easier-to-see Gramboussa across the street) to what turned out to be one of the best meals of the entire trip. We try to order what the locals order when we go out, and this proved to be the way to go that night. The tomatoes, cucumbers, onions and greens came from the family garden. The olives came from the family olive trees. The cheese came the family goat milk. The souvlaki meat came from the family pigs (or goats or sheep, not sure.) The wine came from the family vines. (12 years old and more like a port than the reds we prefer.) Everything was delicious. The dishes were simple, with the perfect balance of flavor and texture. The service, at first, was a bit “whatever” toward us, but then Geni’s smiles and questions won the daughter/mother over and she made us feel like family. (No pics, sorry. Didn’t want to be the “tourists.”)

We hadn’t been impressed by the rocky beach in front of our hotel, nor the grittiness of Kissamos. Suddenly, Geni and I were wondering if there was property for sale near Kaliviani.

(Note: this turned out to be one of our top 5 meals of the entire two month trip.)