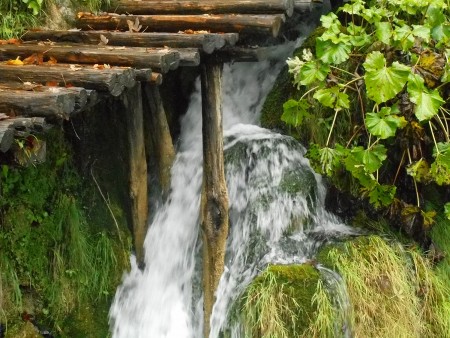 I’m not sure I can take anymore. Every time I think, okay, Croatia has shown me everything it’s got. I’m going to get used to it now and the world around me will feel normal again. Then we entered the alternate universe called Plitvice Lakes. I feel like giving up and finding a YouTube link to post here. But that would be no better than words, and words will fail miserably.

We’d heard that Plitvice was one of the top ten “must see” places in the world. We looked at photos online and videos on YouTube and Vimeo. Wow. Incredible. Magnificent. Stunning.

Sorry. Those words are miserable. They don’t come close. And we almost missed it. 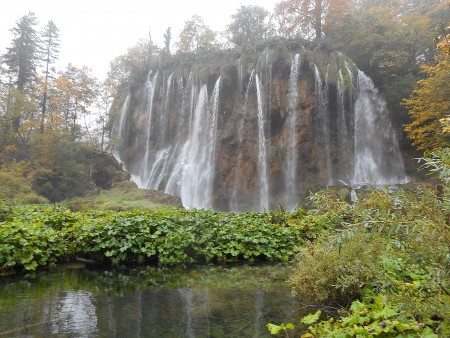 The rains had come and I tried to talk Geni into skipping Plitvice but she insisted we make the drive. We woke up in our 3 room apartment in House Mijic (new stone tiles, new fixtures and furnishings, high end double-hinged windows, $39 per night) and looked out the window. We were inside a cloud. We could barely see the tree in the field behind the house. Light winds blew threads of cloud past the tree to reveal, then hide, houses, cars, people walking to the bakery.

There was no sign of the mountains around us. It was drizzling. It was cold. We didn’t have an umbrella or jackets with hoods. If it stayed like this we’d see the famous waterfalls, but not the mountains, or the true teals and greens of the water, and we’d be shivering.

Quit whining. Buck up gang, let’s do it.

We packed up, found a telescoping umbrella at Konsum Market (after fractured English/Croatian with three staffers), grabbed coffee and pastry takeaway (saying “to-go” draws puzzled blinks and shrugs; it’s called “take-away”), and headed up the valley. We were about 10 km south of the lakes and there were only a few cars and tour buses on the road with us. Views of the mountains were completely hidden, but stands of pine trees and foothills were revealed in the wisps of cloud and in between the bursts of rain. 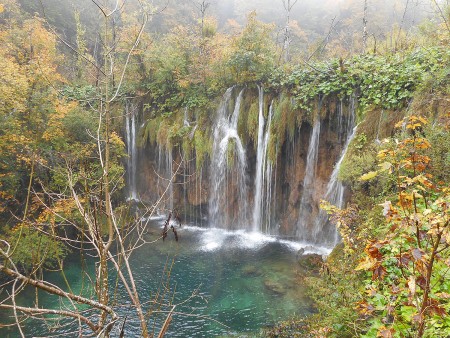 Every few minutes the rain hammered down. It was that kind of rain that high-speed wipers can’t keep up with and you drive about five seconds convinced that you’re about to go off the road and a bus is going to run into you. Then, whoosh, you can see again and you’re still in your lane on the wet road.

The park entrance was a group of old wooden buildings for tickets, food and souvenirs. The lot was almost full, and there were several tour buses there with more coming in. The visitor mix surprised me: 100% European/Canadian/American. Where were all the Chinese/Korean/Japanese tourists we’d been seeing? We bought our tickets, 110 kuna each, and walked over the footbridge above the highway, and then descended through the thick, dripping pine forest.

Halfway down the hill we passed three luxury hotels that were half-hidden in the trees and we stepped off the path onto a road. Two tour buses were unloading there and a third was pulling up. Ah, there we go, the Asians were here. Our revolving crowd of Croatian tourists was whole again. The caucasians were mostly couples of all ages and small families, the asians moved in groups of thirty and their ages ranged from young adult to seniors. 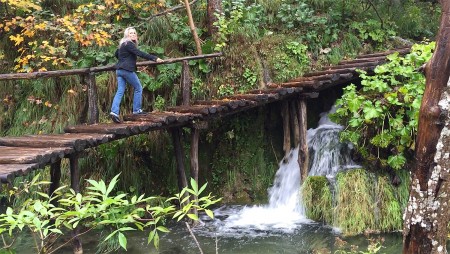 We came out of the trees to a set of boat docks on the lower lake. There were several electric boats waiting there, each carried about 100 people. We got there just as one of the boats was ready to leave and we stepped on board for the fifty meter ride across the lake. Yes, fifty meters. I could have thrown a rock that far. But it saved several kilometers of walking around the lake, so why not?

As the boat crossed, Geni pointed ahead and we clutched each other. Is that possible? Three waterfalls were coming out of the trees ahead and a set of stairs appeared to be climbing directly above the biggest fall. That can’t be right. We giggled. It was too much like in a fairy tale. The mists in the trees made us feel like we were in the land of Lord of the Rings, but without all the battles and death and mayhem. 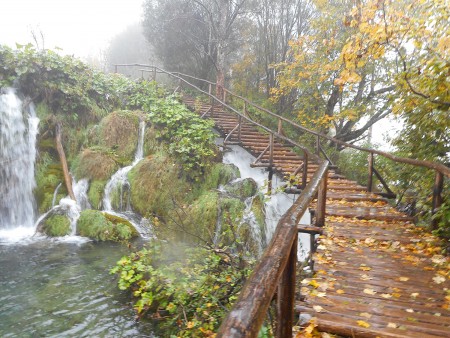 We stepped off the boat and stared. We laughed out loud. That can’t be possible. The stairs climb directly above the waterfall. The supports for the stairs are IN the waterfall. You can see the water rushing below the slats in the steps. We took about twenty pictures, then walked up the stairs. We could feel the vibration of the water, the roar of it loud in our ears.

We got to the top of the stairs and looked back. The full boat of people had stopped on the dock and were all taking pictures of the same thing we’d taken pictures of. We turned and walked on the wooden walkway through a bit of forest. The walkway was inches above the water. We were walking above a lake and water rushed under the walkway along it’s entire length and then fell off the waterfalls we’d seen and fell off waterfalls along the length of this second lake. 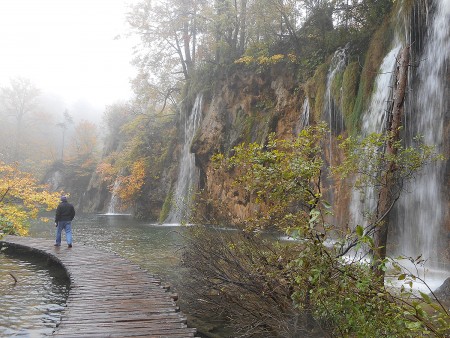 We saw more waterfalls through the trees ahead. We came out on the edge of a lake and stopped dead. 10, 20, 30 waterfalls of different sizes, but falling from the same 20 meter height, came bursting out of an explosion of mosses, reeds, bamboo and pine trees. They fell straight down the faces of limestone walls into the lake we were standing above. Then their water rushed under our feet to join the other waterfalls we’d passed.

We had absolutely been transported to a place of magic. The words incredible, majestic, etc. don’t even come close. We couldn’t imagine what it would have been like with the sun slashing into the pools of clear water and through the leaves overhead and through the rushing waterfalls. But that no longer mattered. The mists and fog and rain brought things in tight and close and we felt wrapped in water. Like we were walking inside a raindrop that moved where we moved. 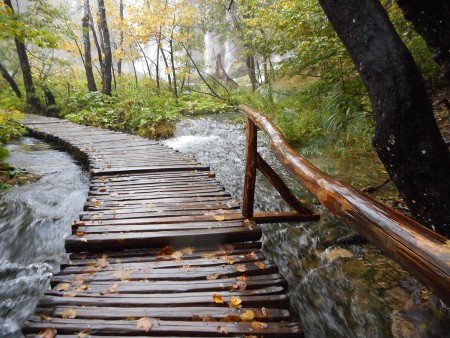 We shared the walkways with hundreds of people, but we were scattered across the miles of park. We’re told that in summer the walkways are packed and you move very slow as everyone takes their selfies. Go there in May or September or October. Go in January if you want to see the partially frozen waterfalls, but don’t go in July or August.

The wooden walkways, hand-made, always had a gradual uphill angle, sometimes with steps built in, and they took us along the edges of five little lakes and up several hundred meters of altitude gain. Every turn revealed a new beautiful piece of the park: small pools with ten types of reeds, and hundreds of types of underwater plants, and whispers gurgles shouts of water moving rushing flowing.

And we only saw one third of the lakes and waterfalls. We had chosen one of the four recommended hikes. You can do one or two or all of the hikes on your 110 kuna ($16.34) ticket. There is another, longer, boat ride you can take. We did the shortest section of the park, but with the highest number of falls. The other sections have taller and bigger falls, with larger vistas into the mountains.

If any of you have felt inspired to visit Croatia based on these posts of mine, but you only have time for one day, skip the medieval cities and go to Plitvice. It’s beyond words. We became as little children, full of wonder and delight that lasted for days afterward. It was so far beyond words that I have to stop trying. 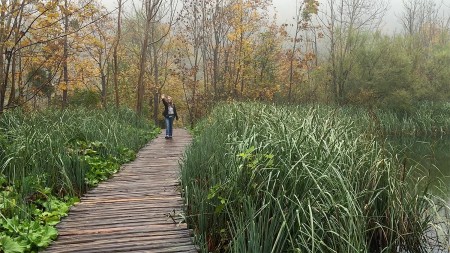 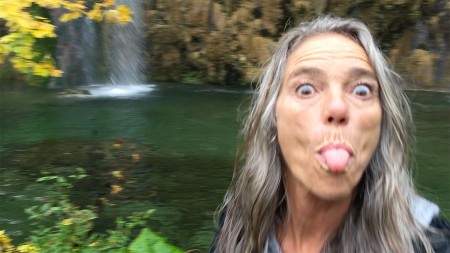 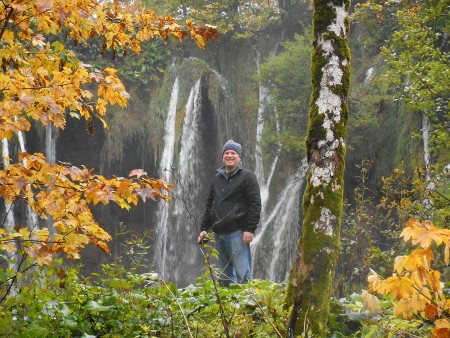 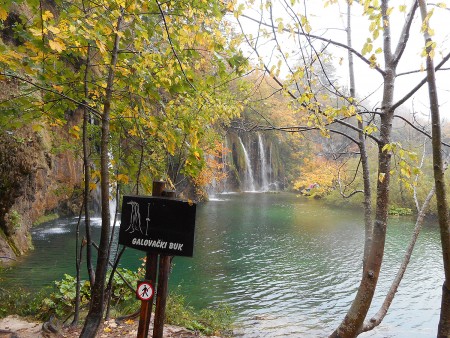 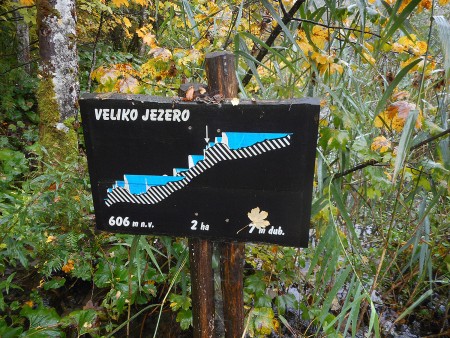 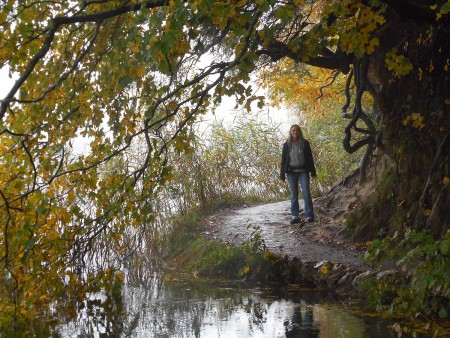