Home Travel Greece Crete Phaistos, About As Old as It Gets

Phaistos, About As Old as It Gets 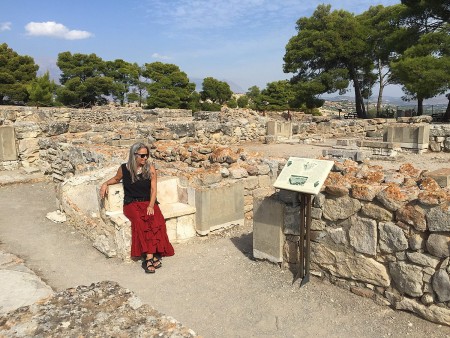 What’s a thousand years, give or take? Did civilization start with the invention of writing or with the invention of bronze? Was the use of chipped stone for tools the demarcation? Who came up with the wheel? Maybe things kicked off with the first woven basket. Or when some crazy person ate an oyster. Perhaps when somebody ate a mushroom and got really high.

Such thoughts ran through my mind when I stood there staring at a pile of old rocks at the Palace of Phaistos. Most studiers-of-very-old-stuff put the start of things in Sumer, but we’re quibbling here. Geni was sitting on a marble bench that someone had sat on almost 4,000 years ago. They sat on it because they were taking a break from a sporting event, or a theatrical event, or a parade, or simply because they were bushed from walking up the mountain and they needed a break before it was their turn to say Hi to the King.

The hill we stood on had people living on it around 4000 BC, but the first Palace didn’t get built until 2000 BC. On the drive there I wondered why it was built so far inland. I figured that if I had been the King (which I probably wouldn’t have been, but I might have made a good jester) I would have put my palace on the ocean so I could go for a swim everyday. One of the info plaques filled me in: the Phaistos hill has a commanding view of a fertile valley. You could keep an eye on the farmers, and the other eye could watch for invaders trying to swipe the food the farmers were growing, or trying to horn in on your territory in general.

Phaistos had been destroyed three times and rebuilt twice. The first two destructions were from earthquakes. The third came at the hands of enemy attackers. 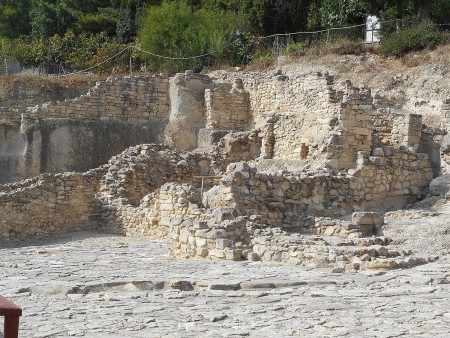 My assumption that Phaistos would be crowded was wrong. There were no tour buses. There were only a dozen cars in the lot when we got there. Employees outnumbered visitors. It was perfect for a slow, thoughtful walk around the site. We could read the plaques at leisure, without worrying that we were bogging other people down. At one point I noticed a beautiful, young Cretan woman sitting on a bench in the shade. As we moved back and forth on that side of the hill, I noticed that she always seemed to be looking at me. “Wow,” I thought. “She’s checking me out! Maybe I don’t look so old after all.” It turned out she was making sure I wasn’t going to climb past one of the barriers into an excavation area. 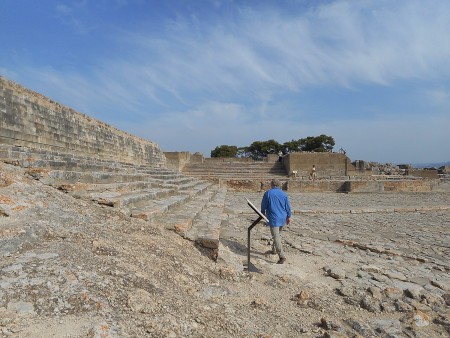 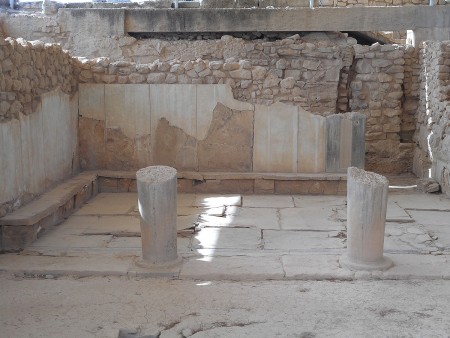 As we moved from section to section there were staffers nearby to keep an eye on things.

At the Palace of Phaistos, an ancient ruin under active excavation, with many areas of easily damaged artifacts, Geni was moving from ancient rock, to ancient footpath, to ancient mortar and pestle, to marble bench, to gypsum wall panel, pausing only to click the button on her camera.

Suddenly, two women near me began to yell and point. “Lady! Lady! No go there!” Geni was about 50 feet away from me, and almost 100 feet away from the women. Geni had wandered past one of the ropes and into a no-go zone. She froze for a second, because it wasn’t obvious which way to go; she had not noticed how she’d gotten to where she was. There was a bit of hand-waving from one of the women as the woman hustled toward her.

Geni tiptoed back into the safe-for-bonehead-tourists area. “Sorry, so sorry,” she yelled and waved. The woman slowed to a stop. She shook her head for a second. Then her friend caught up to her. They became our constant companions from that point on. They mostly watched Geni, but I had become a suspicious character now, by association. For the fun of it, I wandered to a different area to see what they would do. That caused a moment of consternation and their heads swiveled back and forth to track both of us. I saw them make a decision to split up. I knew that would spoil their daily conversation about the kids and the husbands, so I made my way back to Geni. They relaxed for a bit and moved from shade to shade as they followed us to the edge of their territory. A hidden signal must have been made because a new staffer began to track us. 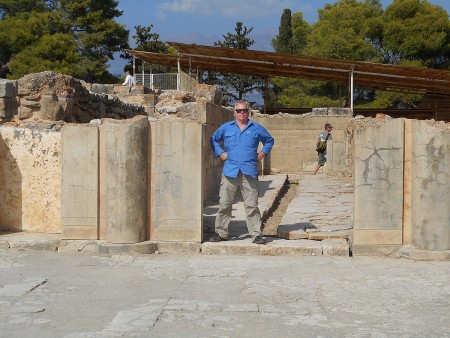 Many times during our walk, we simply stood and stared without saying anything. The lack of a throng (singular of throngs) of tourists made the moments quiet and peaceful. It was easier to imagine walking around the palace as if it still stood and we were members of the community. Wealthy members of course, with an upstairs apartment with balcony and adjoining colonnade. We could watch the sporting events in the main courtyard while sipping wine at our balcony.

It was hard to have a sense of scale when none of the rooms were still standing. The king’s throne room was smaller than the living room in some modern homes I’ve been in. But it had been built with rock and it’s hard to create a large space when you need to keep tons of rock from falling on your head. It must have been overwhelming to visitors though, because most of them lived in homes the size of my closet. 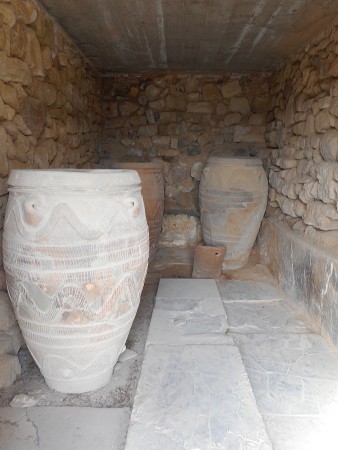 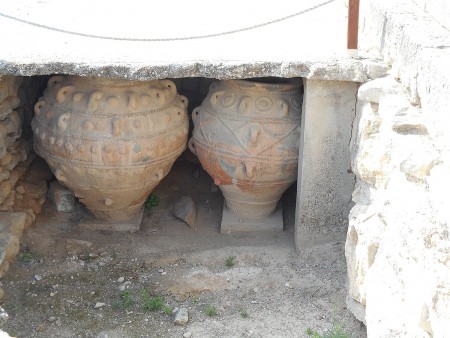 The coolest things we saw were the huge pithoi. They are ceramic storage jars. Most of the surviving jars are about 4 feet tall, but there were a few that were six feet. They had held olive oil, or olives, or other items of value. A large section of the palace had been devoted to the storage of these storage jars, and detailed records had been kept about the movement of the contents. Who owed who, that sort of thing. 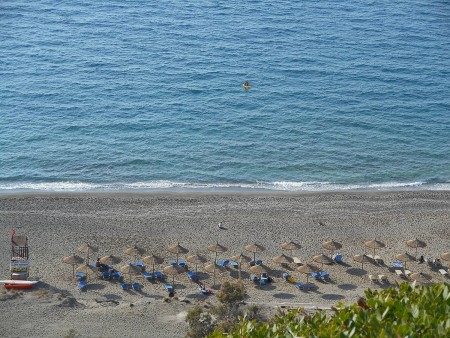 Phaistos was serene. We left relaxed and re-energized, which was nice after the frustration of trying to find the Palace that afternoon. We made a quick side trip to Kommos Beach, but only stayed long enough to wade. The sun would set soon and we had a long drive back to our place near Spili.