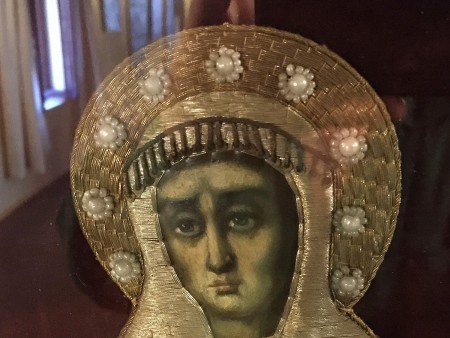 The primary plan for the day was to go to Preveli Beach and the Palm Grove. Geni had also done her research and noticed that there was an interesting monastery on the way. We didn’t know at the time that it was actually two monasteries.

The Preveli Monasteries were the center of religion and education for southwest Crete throughout the Middle Ages. They also played an interesting role in World War II.

Many British, New Zealand, and Australian soldiers had fought with the Cretans against the Germans in the Battle of Crete. The Germans won the battle and, in addition to murdering a couple of villages of people and burning down their homes, went on the hunt for the Brits, Aussies, and Kiwis. Despite the threat of death for harboring or helping these soldiers, people hid them in the mountains and brought food to them. Everything was coordinated by the monks at Preveli. 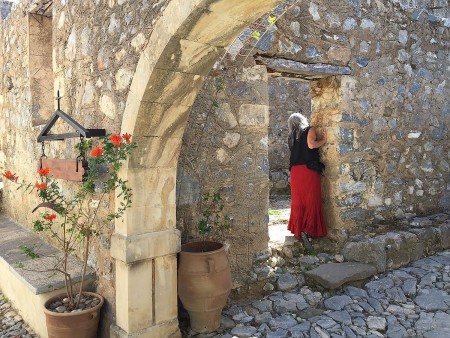 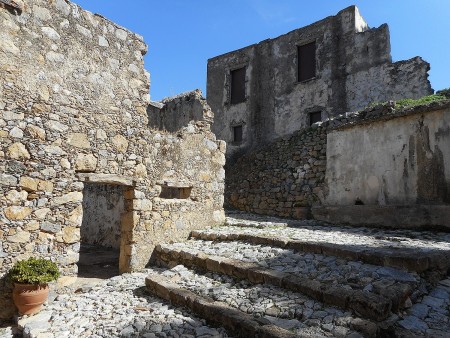 Two submarines came to the rescue off Preveli beach, but only one managed to make the getaway with a bunch of the soldiers. The Germans caught on before the second submarine got in.

The reprisals involved the destruction of everything that wasn’t stone at the lower monastery. The monks from the “rear” or upper monastery were briefly imprisoned and dealt with harshly, but no one gave up the locations of remaining fighters. 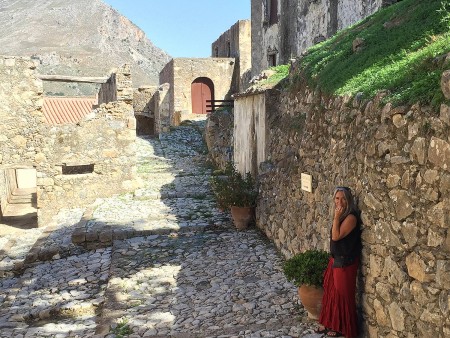 One of the Aussies that escaped went on to do well in business after the war. He donated a lot of money to the monastery and that is one of the reasons it is still in such good shape, and is able to house the monks to this very day.

When we arrived in the area, we only knew about the monastery on top of the hill. Rental cars were all heading that way, and we were, doh-de-doh doh-de-doh, following right along like happy innocent tourists when Geni noticed a small sign for another monastery. The buildings were easily visible from the road. They were “right there” and everybody was driving right by. Did they know something we didn’t, or were they doing the usual “I must tour where the book tells me to tour and only there or I will fail my tourism duties and go to tourist hell?” 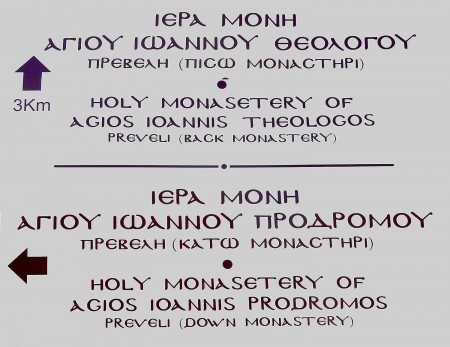 There were only three cars parked in front. “Let’s check it out!” We found a spot to turn around.

The lower monastery has a very rough sort of beauty. The streets are beyond cobble. They found big rocks that were sort-of flat on one side and stuck them alongside similar rocks and called it a road or a lane. The buildings were like that as well, except for the church of course. Everything seemed very old and the black rocks were worn smooth from centuries of rain and wind. There were no limestone or marble pavers anywhere to smooth the surfaces or lighten the colors. It was very utilitarian and simple. Few decorations to speak of, except for the church of course. As usual, the artwork inside the church was incredible. Floor to ceiling, every square inch. But we weren’t allowed to take pictures and the gentleman who charged us 2 euro entrance to the monastery watched our every move to make sure we obeyed. He was a very no-nonsense guy. 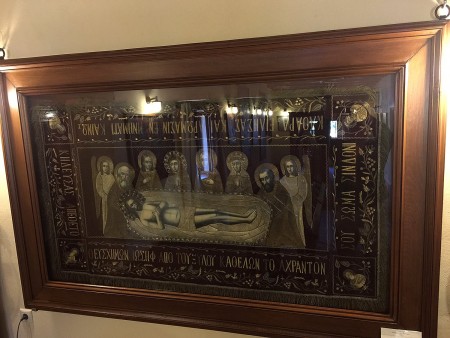 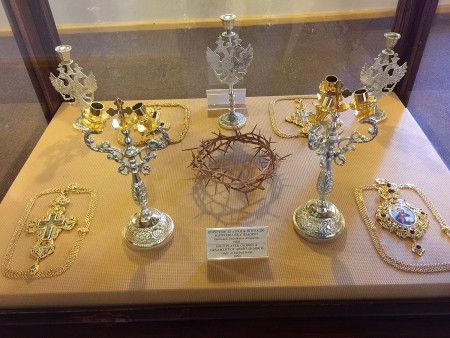 The museum had incredible works of art and we noticed an interesting thing about much of it: the art was mixed media. The paintings of saints included jewels and hand-hammered and cut metal. The most common thing was that halos were made of metal and they were formed to closely follow the face and head of the saints. There were also chalices and vestments. Pictures were okay . . . mostly. We didn’t notice a couple of “No Photos This Section” signs until it was too late. And Geni’s flash went off once or twice, which is frowned on. (Damn camera resets itself every time you turn it off. No setting to change that. Damn camera.) 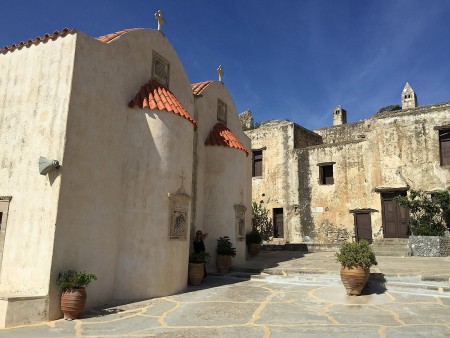 After an hour, we made the drive up the mountain to the upper monastery. It had smooth pavement and yellow stucco. There were huge potted plants here and there. It had a hushed and quiet vibe, different than the one at the other monastery. The other one made you feel like you would wake the ghosts if you talked too loud. This one was more like a library, probably because it was still an active monastery.

It had a nicer church, a bigger museum, and a zoo. The zoo was a puzzler, and still is. They had peacocks, pigs and goats, and some deer. They weren’t there in a farm-like setting. It definitely seemed like a zoo, but one which we could only view from above. No going down the hill to the animals was allowed. That was a head-scratcher. 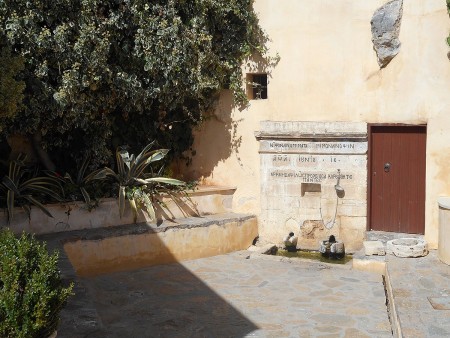 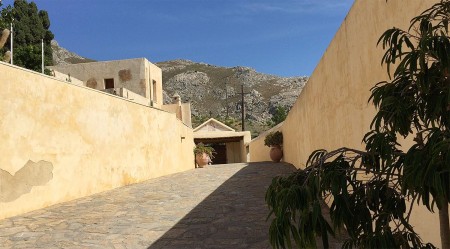 The beauty of upper Preveli was more noticeable, in part, because of the contrast with the lower monastery. There were some interesting touches, like the long, sweeping sitting wall that looked toward the ocean, and the strange, sculpted-in-place downspouts, and the upper doorways that had no stairs. 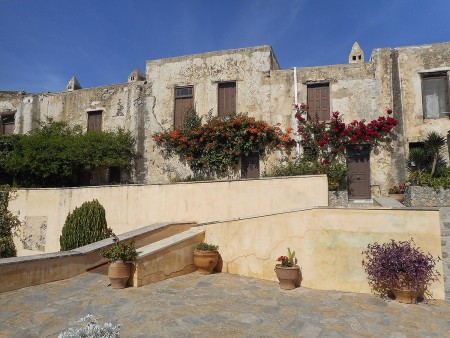 No one was allowed to go into the largest sections of the monastery because the monks were behind their doors doing monk stuff.

Both kinds of beauty made it a great day, and it was only noon. We were about to get blown away 3 more times before the day was over. 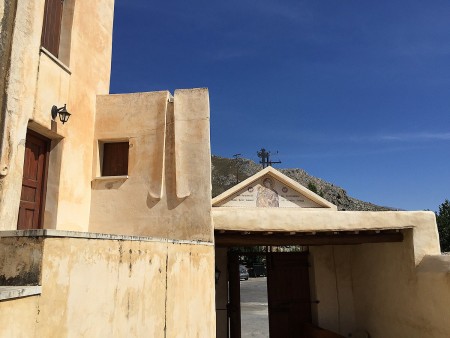 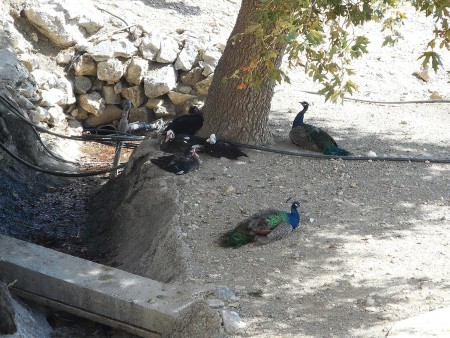 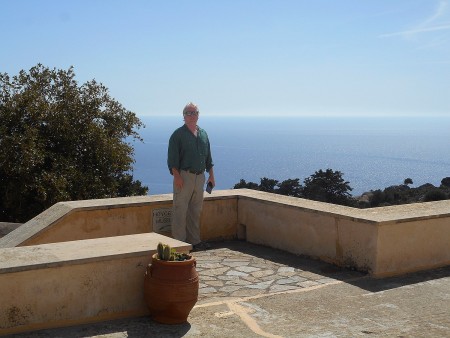