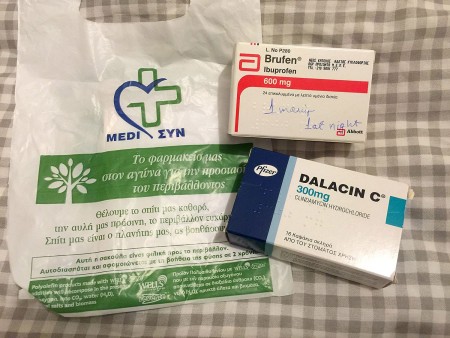 We’re extending our trip for 3 more weeks in Greece . . . for not-so-good reasons.

Last Saturday night in Nafplio, Greece. We were staying in the beautiful Latini Hotel located in the old town, and Geni woke up with a nasty toothache. The left side of her face was swollen and it was 3 am. A root canal, done before we left to stabilize a deteriorating situation, had failed. She took 1/2 of one of the pain meds she had brought in our trip medical kit to get through the night.

The woman in charge of breakfast at the hotel said there would be no way to get a dentist on Sunday and suggested we go to the hospital. The hospital in Nafplio was small and no help so we raced off to Argos, 16 km away. The doctor gave her prescriptions for pain meds and antibiotics. No charge for his time or hospital fees. He looked puzzled when we asked how much we owed. “Medical care is free in Greece,” he said.

Then began a rapid, 3-man discussion between the doctor, another doctor, and the ambulance driver on how to tell us how to find the only open-on-Sunday pharmacy in Argos. Loud. Rapid-fire. Hand-waving. Disagreements. Drawing maps on prescription forms. Maps crumpled in disgust. Everybody knows how to get where they want to go, but it’s impossible to describe it to someone else. They can’t even tell each other how to get somewhere. Everybody has a different way of getting to the same place. Imagine trying to give directions to somebody that doesn’t speak Greek and is assumed to be unnerved by the crazy drivers and motorcyclists.

I pulled out my phone and opened it to a maps app. The little blue glow of our position at the hospital pulsed on the screen. “Yes, of course!” Much happiness and nodding of heads. The ambulance driver moved the map around and tapped the location of the pharmacy. More nodding of heads and much congratulations. Off we went. Cost of medicine: 6 euro. Cost of quart of OJ, two chocolate croissants, and one ham and cheese croissant (fresh! flaky! awesome!) at the bakery on the way out of town: 6 euro 50.

Geni has been in a lot of pain this week, especially when the meds wore off, but no whining or moaning, just the occasional crankiness at the stupid jokes from her chauffeur.

Her face was swollen for almost three days and she began to call herself “Elephant Woman.” She insisted that life and vacation would go on as planned. Except on that Sunday. We hunkered down in our room, after visiting with the owners of the hotel, Vasilis and Evenella. We had already befriended them, and they felt terrible for her. They gave us the name of their dentist, assuring us he was the best in the area. They contacted him and set up an appointment for the first thing on Monday.

We were a bit nervous. Going into a dentist anywhere is never fun. But going to a stranger in a strange land intensified that feeling. We’ve had a lifetime of “America has the best medical care in the world.” Well, we all know that is bullshit by now, right? We’ve all heard the horror stories of surgeries gone bad in the States, haven’t we? And no need for me to go into a diatribe about the cost of U.S. medical care, is there?

We’ve been hearing for years about excellent medical care being available all over the world. We’ve seen people from dozens of countries and their teeth looked fine. Our hosts at the hotel have nice teeth. We were nervous, but not scared or freaked out. Dr. Kapamaoynas, or Dr. K. as Geni quickly dubbed him (much to his delight) had a very nice office with modern dental equipment and an expert assistant.

Geni has had major dental problems for many years (bad DNA from her Dad’s side) and she has had a lot of work on her teeth. She knows all the details of her dental history and Dr. K. proved his expertise immediately in his discussion of her previous dental work based on the x-rays and an initial look at her mouth.

Off to the radiologist across town. Equipment for the panoramic x-ray was better than she’d seen at her last two dentists. Previous panorama in Oregon: $900. Panorama in Nafplio: 30 euro.

Back to Dr. K. He can’t do anything for her until the swelling goes down and the infection is over. So we continued with our vacation. We walked the walls of Palamidi Castle. We strolled the promenade around the peninsula. We walked the streets of Nafplio and shopped and had dinners and drinks. During our strolls and dinners, everyone that saw us thought that I was a wife-beater and wondered why the poor woman stays with me. You could see it in their faces. Waitresses gave me especially dark looks.

The swelling went down within three days, but the infection was hanging in there. After studying her x-rays, and discussing with a colleague in Athens, Dr. K. decided that most of the work needed to be done by a specialist in Athens. Three visits to Dr. K: 100 euro.

So here we are in Athens for the weekend. We’re going to the Acropolis, the Agora, the Parthenon, two museums and fifty taverns and restaurants. Geni looks good and people no longer assume that I beat her.

Then we drive back to Nafplio for Dr. K. to design, have built, and install a 5-part bridge. The current estimate for that is 1500 euro, but could go up depending on materials used.

I’m writing this at 23:04 on Friday night. We’re supposed to be boarding a 6:30 am flight to Portland tomorrow morning for our return to family, friends, fun and work in Oregon. Not gonna make it. Flight has been changed to November 21.

Other than a few moments of agony now and then, Geni has been a trooper and is firm in her commitment to continue enjoying the trip of a lifetime. We will now be seeing parts of Greece that didn’t make our plans before. We’ve got an apartment in Nafplio and I’ll be doing a lot more remote work on my laptop for clients in Eugene. (I’ve been spending about 7 to 10 hours per week working while on this trip. More on that later.) We’ll bust out for a day or so to see something outrageous and I’ll continue my reports.

Thanks for the encouragement and Geni asked me to add one thing: please no Comments about “poor Geni.” She’s still going for it, as always. We’re in Greece. Root canals or not, we’re going to tour wineries near the place where the first god of wine came from.