The Army Corps of Engineers begins draining Fern Ridge Reservoir during the first week of October every year. The primary purpose of the reservoir is for downstream flood abatement, so they leave just enough water to keep wildlife alive and then hold it mostly empty for the winter in case a several-day-storm comes along. Then they let the extra water fill the dam while controlling stream flow below.

We usually take the boat out that week and put it into winter storage, but this year we went to Newport, Oregon for the annual Columbus Day Regatta. The winds were light and we were the only trimaran in a crowd of monohulls. Conditions favored them, so even though we crossed the line in the middle of the pack, most of the monos corrected over us on handicap time. That’s okay, we had a lot of fun.

One of the more exciting moments of the weekend was getting the boat in and out of the water. Here is a sequence of photos showing the first time we hoisted it with a crane. (Tom and Deb Emery, the previous owners, had done this many times, but knowing that didn’t keep it from being a nervous moment for us.) The hoist operator (after it was safely back on the trailer at the end of the weekend) told us he didn’t like hoisting with the swaged steel cables we have. He wants us to get 3/8 inch chain. Hmmm, I don’t know enough to argue it one way or the other. 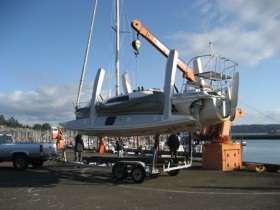 Up she goes!
This photo has a good view of the over-sized pushpit (the stainless railing) on the back of the boat. Most F-27’s have a much smaller/lower pushpit, but Tom had this one custom made. It integrates the mast-carrying posts, large solar panel support, GPS and VHF antennae support, and abundant locations for the barbeque (not mounted here). Now that I’ve gotten into racing I kinda hate having all that weight back there. It also creates a bit of a “closed-in” feeling to the cockpit. NOTE: the upper section of the pushpit was cut off in 2011. 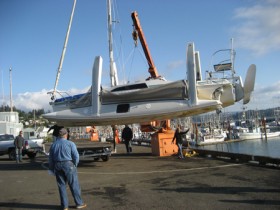 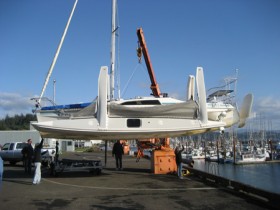 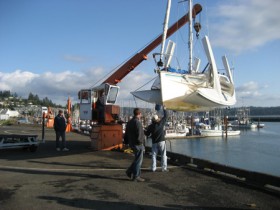 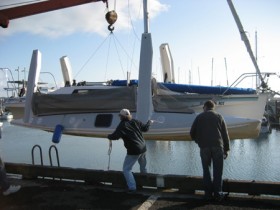 It is low tide and the water is about 30 feet below the pavement. I was more worried about the boat banging against the gnarly posts and beams of the dock than I was about the cables breaking. That little blue fender was pretty useless. Next time I’ll prepare a batter board. 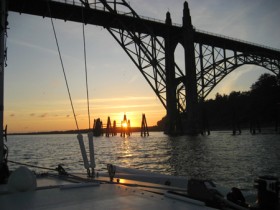 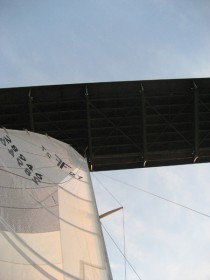 Soon after putting the boat in the water we went for a quick sail out past the Yaquina Bay Bridge. Beautiful evening! 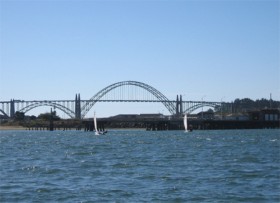 A couple of dinghies warming up before the first race of the regatta. You may have heard that it rains all the time on the Oregon Coast. Actually, fall can often look just like this . . . the summer fogs are gone and the winter rains haven’t started. 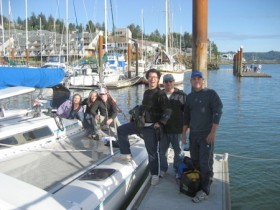