The main highways of Croatia appear to have been built in the past ten or twenty years. They’re in excellent condition and amazingly clean. In fact, that’s something we’ve noticed everywhere, and not just in tourist areas: the Croatians don’t throw trash out the window or drop it on the sidewalk. If something does end up there (from a cigarette smoker perhaps) it’s gone the next day. 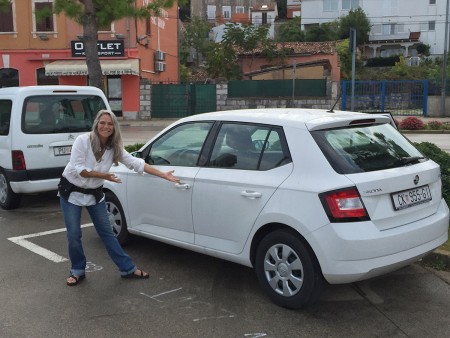 We left Zagreb Airport in our brand new Skoda (Czech Republic auto) that cost $7.85 per day to rent. That was so cheap that we splurged and added on the $1.85 per day hit-a-goat or drive-off-a-cliff insurance.

The Skoda was a very nice car. Nice fit and finish, and it handled well, though a bit underpowered when trying to keep up with the speed demons. One cool thing, if you’re at a stoplight and put it in neutral, then take your foot off the clutch, the engine shuts down. Push in the clutch and it starts immediately. Gas saver.

We immediately took a left out of the airport when we should have gone straight and drove for ten minutes through green fields, and then through our first Croatian village of red tile roofed houses, past the Skola (school) with kids in the playground and then came to a gravel road for tractors. Nice detour.

(Note 2: we intentionally weren’t using a GPS of any kind. We like the adventure of finding our way . . . especially nice when you get lost. Usually anyway.)

We backtracked and found the highway and zoomed along for a couple of hours trying to keep up with the crazy Germans, French and Croats—speedsters every one. We got into a mountain range and my thought that we were only a few hours from Rovinj faded. It was going to take a full day to get through those mountains. Then we came to a tunnel. Soon after, another tunnel. And another. We stopped keeping track after a while. Some were short, just a few hundred meters. But one tunnel was over three miles long (I forget the kilometers because we converted it right away.)

The tunnels are well-lit and with pull outs for SOS phone calls. In fact, in tunnel or out, there were SOS pullouts every couple of kilometers.

We took the side roads to Motovun and those roads were as nice and well-kept as the main highways. The yards were tidy at each little village. The cars were in good shape. The roofs looked new, unless it was a stone house or barn that had been given up on. Those simply added to the charm and added to the sense of tidiness everywhere else.

So, I know some of you were saying to yourselves . . . yeah $7.85 per day, sure, but how much was the gas? At the moment I forget the price per liter but we traveled around 2800 kilometers and we spent $90 on petrol. Petrol Super 95 by the way. We didn’t go crazy and jump to Petrol Super Duper 98 though. I’m cheap.

(Late note: we rented 3 cars during the trip. The Skoda in Croatia, a Chevy in Crete, and a VW Golf in mainland Greece. The Skoda was our favorite; better than the VW and the Chevy wasn’t even close.)