Home Travel Croatia Waylaid on the Way to Foodie Heaven

Waylaid on the Way to Foodie Heaven 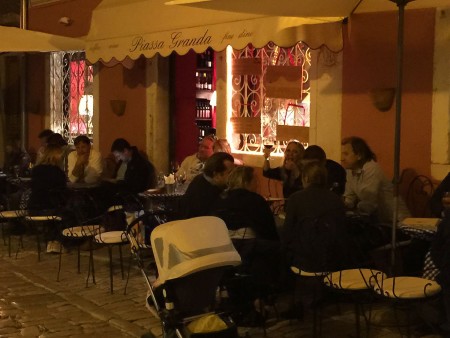 We had plans to try a couple of restaurants while we were in Rovinj. Scuba Restaurant was recommended by our friends Brian and Kate, and Restaurant Monte was one of the places Anthony Bourdain stopped by on his trip to Croatia. Monte is one of those places that has a 5- or 6-course tasting menu. You’ll be spending about $150 to $200 per person for your dinner. Yep. (Check out their menu.)

On our first night in Rovinj we were headed for Scuba, walking the narrow, cobbled lanes downhill from our place. Took a turn, took another turn, and a third turn. Are we sure we’re going the right way? Then we heard voices echoing. Laughter. The clink of glasses, reflection of lights.

We knew it wasn’t Scuba because that was on the water and we were halfway between the bay to the north and the harbor to the south.

We came around another turn and saw a couple of tables full of diners and a waiter hovering. As we continued, more tables revealed themselves until we came to a wider lane and saw Restaurant Balbi on the downhill side of the lane with about 60 seats outside and a dozen inside and a wine bar called Piassa Granda on the uphill side with 30 seats outside and 20 inside. Balbi was full and everybody was eating or waiting for their food. There were two tables empty at Granda. We walked between both places and went on by.

(Pictures of this spot are in one of my earlier posts. Look for the car backing up between tables. Sorry the images are so dark. I considered lightening them in Photoshop but resisted. This is a more accurate view of what it looks like at night.)

Then we stopped. What’s the rush? Let’s have a glass of wine and do some people watching. So we turned around and grabbed a small table at Granda. We sat side by side with our backs to the wall so we could watch the lane and the Balbi action and eavesdrop on the Germans to our right and the Croats to our left.

Here’s where the uphill/downhill thing gets important. First of all, you can forget about the feet of your chairs or tables sitting flat. You will wobble. Next, the tables at Granda are level-ish. You don’t have to hang onto your glass every second. But you have to pay a bit of attention when you put it down or move it. More so with wine bottles of course.

We started with a glass of wine each and we paged through the menu and saw that it was a complete dinner menu, not just appetizers. 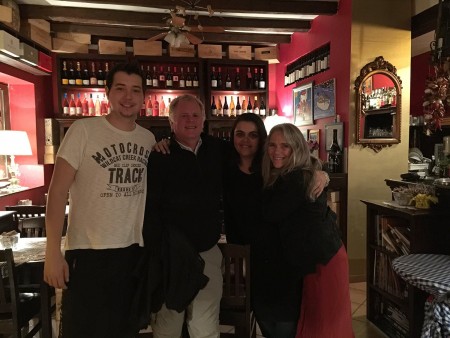 Then Matej came out. Funny, happy, a tiny bit extravagant, and he speaks six languages. Not fluently he’ll admit, but enough to take orders, talk about wine and food, and suggest things to do in the area. He talked us into tuna bruschetta. Then we added marinated sea bass and a platter of ombolo and prosciutto. Those came with a big bowl of chopped bread sitting in a pool of herbed olive oil. There was also a box with a bottle of balsamic and napkins. Oh, and the silverware came in their own little fabric socks. What the hell, let’s add a full bottle of wine.

Now, picture all of that on your basic, tiny, round cocktail table. I was worrying about the wine bottle falling off, so I tried to put it on an empty chair but Matej caught me. He put the bottle back on the table, near the edge no less, and declared: “Wine does not fall from tables. Wine is for drinking, not falling.”

Pretty much the same thing was going on at every table. Matej was handling all of us on his own and he switched among languages on the fly without any “umms” or “errs” in between. We tried to chat with our neighbors but things generally ended with smiles and shrugs. We mostly watched Matej and noticed that the people at the other restaurant were being entertained by him as well. A few of them finished their dinners and came over to our side of the lane for their nightcaps.

So much for Monte or Scuba. We stayed for quite a while and became Matej’s favorite customers. He brought the bartender out to meet us. She is the owner’s sister. Then later, he brought the owner to meet us. (No, he wasn’t doing that at every table.)

You can guess the rest of the weekend, right? The next night was dinner at Piassa Granda, and the night after that. We knew we were missing special food at other places, but hanging with new friends was more important.

Matej was better dressed our first two nights there. He got lazy on Sunday night. Mandi is the bartender and also a cook and the owner’s sister. She grew up a few minutes away up one of the tiny lanes and can’t wait to get out of town for the winters.