One Faucet Closes, Another Opens 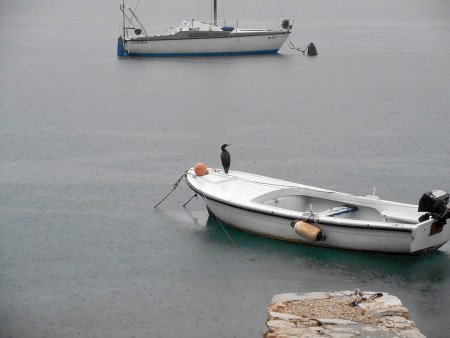 We intentionally set our trip for October in order to avoid the tourist crowds. September might have been a better choice, because October has mixed blessings.

Everywhere we’ve been so far, the waiters, bartenders, cabbies and so on are tourist-fatigued. Most of them have been working 12 hour days, 7 days a week, since early May. Yet we seem to have come at a time when their spirits are lifting because they can count the days until the restaurant closes for the winter and they can go off on their own holidays. A cook we met is looking forward to her three months in London with Croatian friends. A waiter is going to Crete. A cabbie is going to New York City.

I can’t imagine what some of these places must be like in August. One day in Rovinj we were on our way back to our apartment. We turned the corner into our lane and the way was completely blocked by a tour group. A woman was pointing at a sculpture built into the wall over a door not far from our entrance. Approximately 40 people were crowded together in the lane listening to her. There was no way we could get by without disrupting the entire group. So we waited for five minutes. I had been told that in August that is the scene in almost every lane in Rovinj all day long. The most popular lanes have five to eight groups in them at a time, slowly moving up the hill to the church. A waiter said he’d counted a dozen such groups around the church once.

Good thing for everybody that technology has gotten better for tour groups. Instead of trying to shout loud enough for the group, and disrupting everyone within shouting distance, the leaders now have tiny microphones and all the members of the groups have headphones to listen to explanations. It seems to work pretty well.

That lane blockage in Rovinj was the worst we saw. The restaurants were still all open, but many sat empty and the head waiters stood near the menu podiums and tried to lure you to one of their tables. Boat tours and bike rentals were still running. There was enough activity to make it exciting. 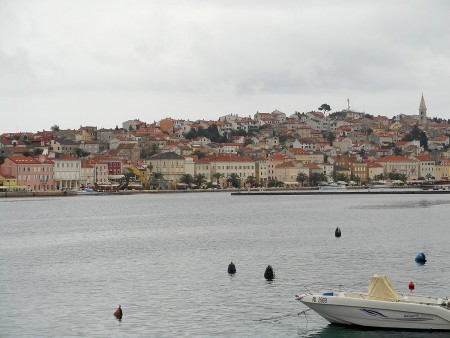 We assumed it would be the same in Mali Losinj. We arrived late in the afternoon and immediately took a walk around the harbor. Several restaurants were closed for the winter, but the one nearest our apartment was full. A few stores down the way, people were returing the bikes they’d rented for the day. Couples and small groups of four to six people were strolling the promenade on that grey, drippy afternoon.

The tourism faucet closed on our second day in Mali Losinj.

The bike shop was closed for the winter, and we had planned to rent for the entire day to ride around the peninsulas. There are miles of paved bikeways/sidewalks around Mali. It would be easy to spend several days riding around in the beautiful scenery and stopping for lunch at a small tavern.

Many of the restaurants were closed for the winter, including the one nearest our place. And that’s the one we most wanted to go to because it was where the locals went when they wanted to eat next to the harbor. 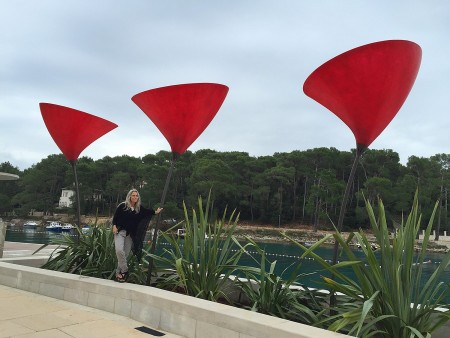 The strollers of the harbor were almost non-existent. It was as if a signal had gone out that was invisible to the silly Americans. “Party over, everyone go home.” The only out-of-towners left were the gang of race boat sailors that were there for a weekend regatta. They all had shown up in 45 foot rental boats, a charter one-design fleet, and spent each day in the wind and rain somewhere out of sight. They returned to the harbor, did the Med-tie-up (stern to the dock, bow anchored out), and partied in their cockpits for a few hours before going out on the town.

The weather faucet opened. The sky covered up and the rain came pounding down. People use umbrellas here because the rain comes and goes, but when it comes it will soak you in seconds. Not like Oregon where you can ignore the steady mist and drizzle.

Guess what? No umbrella at hand for the stupid Americans and our host was not home to ask to borrow one. We tried many shops, but couldn’t find umbrellas for sale.

Mali began looking like a living impressionistic painting. The water sliding down everywhere, on all those peach and tan and pink and orange and red surfaces, made it seem as if someone had opened up the celestial Photoshop and run the impressionism filter a couple of times and then added the perfect amount of gaussian blur. So we drove around more than we’d planned to. We waited for breaks in the rain. 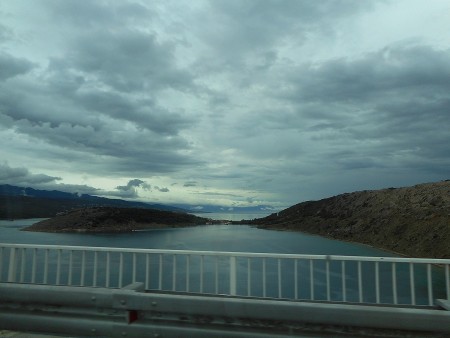 There was a break in the rain at dinner time and we arrived at Restaurant Baracuda at 20:30 (8:30 pm to you Americans) and there was no one there. The sixteen outside tables were empty, and a glance up the stairs to the inside showed that those tables were empty as well. The waitress tried to encourage us to sit inside, but we were on vacation and wanted to watch people walk by, even though they were all gone. She tried to convey, with hand signals and bits of German and English, that it could rain at any time. We looked at the huge awnings overhead and felt protected. We smiled and indicated our preferred table outside. She gave that universal look of “don’t say I didn’t tell you so” and led us to the perfect corner table.

Baracuda is considered the best seafood restaurant in Mali and one of the best in the Dalmatian islands. It was towel-over-the-sleeve service. Feel and test the cork, sip the wine, nod approval . . . only then is the wine poured. Bread service with oil and balsamic mixed with herbs. A viewing of the fresh fish of the day on a platter held just so . . . hmmm, we’ll have that sea bass for two please. Baked or grilled? Hmmm, baked please, with potatoes and zucchini and onions and garlic and olive oil. Yes, that sounds perfect.They were the living description of true service . . . something I’d first heard about from our neighbors the Moroni’s in Oak Park, Illinois.

Mr. Moroni owned the Corona Cafe in downtown Chicago. It was an elegant, yet family-feel restaurant. Waiters weren’t “waiters”— someone to hurry up and get what you wanted pronto. Waiters there prided themselves on service. They were there to serve you. To make your evening perfect. They were part of your meal, not a slave to your whims, but someone to make you feel at home, while making you feel important at the same time. They were there for you and if anything was wrong, it made them sad and they would do whatever it took to make things right. In fact, once you got used to it, they weren’t even there, yet your water glass was always full and the correct knife was always at hand and they noticed if you were left-handed or right and put the dinner plate down for that hand.

It was the same at Restaurant Baracuda. While we sipped our pre-dinner wine, other parties joined us. Now there were four other tables of people in the outside area. A family of four Italians. Another couple. Four Italian men who seemed to be on a business trip. And eight sailors from the regatta.

We watched the waiter and waitress encourage all of them to sit inside. All declined.

A two-candle warmer was placed on our table and the silver tray atop that. Our two plates were placed there to be warmed. Then the fish arrived in the pan in which it had been baked. The waiter (the waitress had turned us over to him because he was fluent in English) boned the fish and scooped the food from the pan onto our plates, all the while talking about the fish and the fisherman and the gardens from which the potatos came. We began to eat a perfect fish dinner.

The fish flaked and melted in our mouths with the perfect combination of fish, herbs, and oil. The vegetables were soft and delicious.

The other tables were in their pre-dinner wine sipping, and eating starter dishes. All except for the family of Italians. They were peering and tap-tap-tapping at their smartphones. Very strange.

Then the deluge began. There were four huge awnings over the tables, but they weren’t enough. Water began streaming down the walls, the awnings began to belly and the water began to drip through the soft spots in the canvas. Geni shifted closer to me because water was splashing on the ground beside her and getting her legs wet. A drip formed directly over our table and I had to shift the warming tray and fish pan slightly. The drops came from so high in the air though, that the splash from a single drop was getting both of us wet. I put a crumpled cloth napkin there and it swallowed the force of it.

We looked around, expecting the waiter to come help us carry our plates and glasses inside.

No, they continued to serve as if nothing was different, with the twist that, rather than scoot us inside, they struggled to make us comfortable under the drips. Ah, we had carefully chosen our tables. Of course we would not wish to move due to the minor annoyance of rain drops! That would have made us stupid to begin with and they would never want to insinuate that!

So, everyone shifted and continued their wine and food as if nothing strange was going on. Everyone except the Italian family. They appeared to be irritated that the rain was interrupting their games and news. Everyone else seemed to be following a code: you made your choice, live with it. So we did, and we shared in the enjoyment of shifting and eating and wiping. We exchanged smiles and laughs with the other diners as they shifted and wiped as well. We couldn’t talk because we were a few tables spread out across the restaurant, but our smiles and glances were enough. And they wouldn’t have happened if it hadn’t rained.

At one point we finally did move. The drip over our table became fifty drips. The waitress helped us carry our things to another table, still outside, where we finished our dinner. At that table Geni had to stand a couple of times so the waiter could use a chair next to her to push up the belly of an awning threatening to explode. He had to push a wave of water off the edge of the awning and let it fall back and push again and fall back. He did that for about two minutes to empty the belly. Then he had to return in five minutes to do it again. All with smiles and laughter and little jokes.

An excellent meal in Mali Losinj, Croatia and one we’ll never forget.

(Sorry no photos of the dinner and drips. We felt it would have been tacky breaking out the smartphone during dinner.) 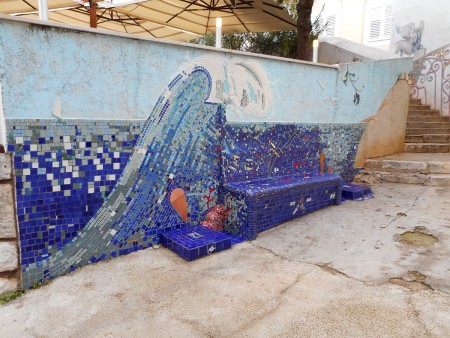 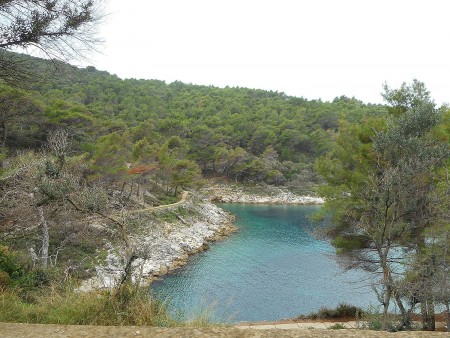 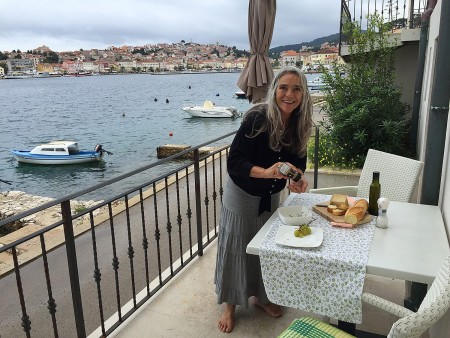