Home Travel Croatia The Enemies Must Have Been Brutal

The Enemies Must Have Been Brutal 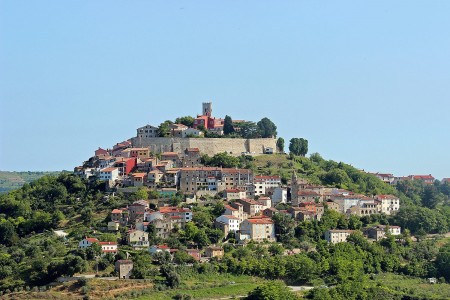 You can see the town of Motovun, Croatia when you come around a fold in the Ucka Mountains. It completely covers the top of a very steep mountain, surrounded by a beautiful valley.

Hundreds of years ago, if you weren’t welcome, but you wanted to go there anyway, you had to climb that steep mountain through trees and brush. Then you came to a 100 foot wide, cleared, very steep area between you and the wall. A good archer could pick you off without trouble. But if you dodged the arrows, then you came to the 40 foot wall. Straight up. 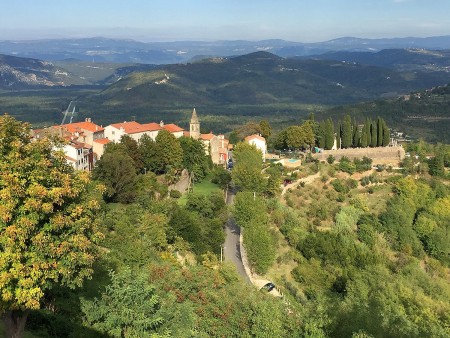 Unless you brought a 40 foot ladder up the mountain with you, you weren’t climbing the wall. But let’s just say you’re one of those rock climbers that can grip a rock with the tips of your fingers and toes. Let’s continue your luck: you don’t get hit with arrows or rocks dropped on your head and you make it to the top of the wall. Good job. Now you’ve got a narrow walkway to stand on, and you’re surrounded by guys with swords.

But you’re the medieval Batman and you do away with the all the swordsman because you’re the shit. Do you turn to raise your arms and claim your victory?

No, you’ve got an 8 foot deep trench to drop into . . . and then a 12 foot rock wall to climb. Walls within walls, baby. You have to earn every inch of your upcoming triumph, sacking, and pillaging. And you’re Batman, remember, not Spiderman, so you can’t just shoot some Spidey silk into a tree and fly over. And you already used your Batman bat-shaped grappling hooks when your fingertips failed on the way up the first wall. And the next wall, there are archers there too and they’ve been pinging arrows off the armor you dragged up the wall behind you. The same armor that you had to put on while the swordsman politely waited till you cinched your chin strap. 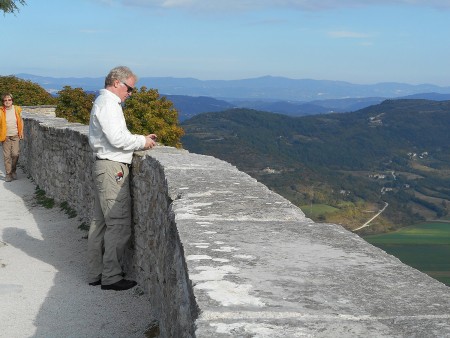 So you manage to get over that second wall and you’re in. But you’re probably by yourself because none of your fellow marauders were stupid enough to go the way you went. They’re a different kind of stupid. They got hemmed into a small courtyard by the main gate where the tricky citizens of Motovun did mean things to them. But, now that we think about it, you’re really the general that stayed down the hill and sent the teenagers up the walls and into the tiny courtyard to test the mettle of the Motovun villagers.

The villagers met the challenge, you lost a few brave teenagers, so now, big sigh, you have to settle down in the villa you just stole, with the wine and ham you stole, and begin the long seige.

Yes, these are the things I think about when I walk the walls of these medieval cities. They didn’t haul all those rocks for fun. The enemies must have been brutal to cause people to cut and carry and mortar into place that many tons of rocks for protection. What did they do during the building of the walls? Just hide in the woods, or take the death and destruction?

But hey, this is the 21st Century! The marauders these days are called tourists and they carry cash instead of swords! 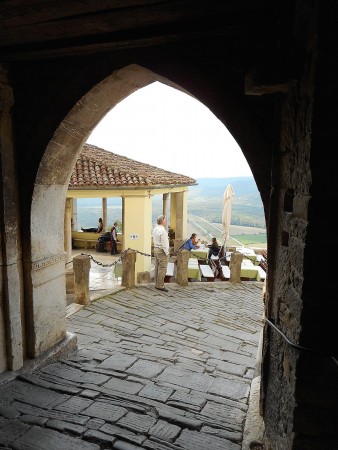 So walk right in the gate of this medieval walled town and try to keep your jaw from dropping. We stopped at Motovun for a couple of hours on our way between Zagreb and Rovinj. There are tiny lanes to stroll, up and down the many stairs. There are little shops, most filled with kitschy crap, but some with incredible handmade objects and the work of local artists. Geni likes to go into those shops but I refuse. There are too many things to like, I can’t carry them around Europe with me, and I can’t afford them anyway. Plus I don’t like getting the shopkeepers hopes up and then walking out without making a purchase.

I had jaden pivo and Geni had jaden crno vino (one beer and one red wine) on a broad terrace overlooking the beautiful valley of the river Mirna. This is the area of Istrian truffles. (Istria is a large peninsula at the northwest corner of Croatia.)

Our table was beside the wall. If I dropped my camera over the edge of the wall it wouldn’t have stopped for several hundred feet. The tourist-fatigued waitress was helping about ten tables and she looked tired and overworked. But she had time for a smile and a chuckle as we struggled to order in Croatian. She spoke perfect English, but she was happy that we made the effort and she took the time to correct our pronunciation.

While beautiful, I had the sense that the town was mostly empty at night. Peaceful if you want that, but potentially full of the ghosts of ancient marauders. 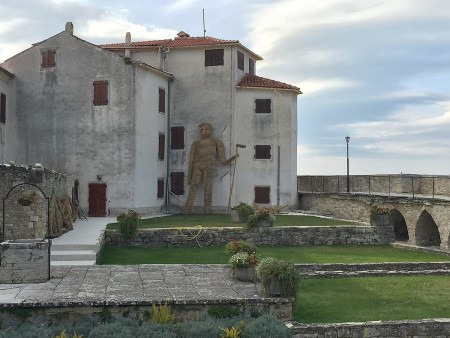