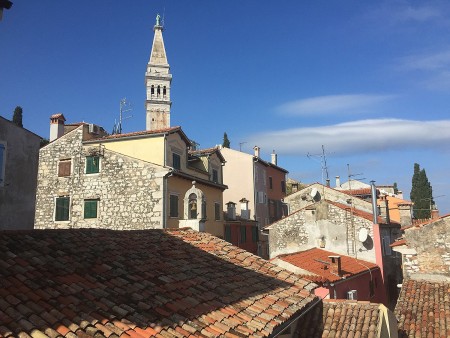 It began this morning at 4am in our flat at the top of three and a half steep flights of stairs, in a house built circa 1600 part way up the hill toward the statue of St. Euphemia on top of her church on the peninsula that is old Rovinj, Croatia.

I grew up in the Midwest, a region where thunderstorms are a thrilling part of a kid’s summer. The crashing and banging of thunder and the flash and slash of lightning with an inch of rain slamming your head in a minute . . . it sometimes seemed as if you were inside the storm with Uncle Thunder and Aunt Lightning and they were throwing a big party intended to wake up the lock-step, couch-locked, staring-at-the-ground adults that surrounded us kids. I loved it. They were two of my favorite relatives. They were the crazy ones in the family that everybody liked to see for a while, then wished they would go home.

Then I moved to Oregon. Sure, you’ve heard it. Wet. Rainy. Green. Yep, but the rain isn’t a pounding down of wet hammer. It’s an ongoing drizzle from your mom’s plant mister. You don’t need a hood most times, much less an umbrella. People stand around with mist filling up their hair. It builds to drops of water that finally break free to run down your face and down your neck. We wipe the drips away and carry on our conversations. 45 inches of it a year. If Uncle and Auntie come for a visit it’s only once every few years and their party is always somewhere over a distant mountain.

At 4 am last night, from out of nowhere, Uncle Thunder and Aunt Lightning jumped into the tiny bedroom in the top of the stone house. They roared and clanged and banged and flashed and slashed like they were happy we’d come to visit after all these years. So happy, in fact, that they’d decided to let us get to sleep and then surprise us in the middle of the night. Their commotion swept right through the walls and bounced around these narrow, cobbled-marble walkways and old stone houses like they knew every twist and turn, every step, every awning of Rovinj. Rain hammered the tile roof over our heads and was as loud as when it hits the tin roof on your shed out back.

I looked up at the beams in the ceiling and didn’t mind a bit that my jet-lagged body needed more sleep. I smiled and listened to the roll and crash of Uncle ricochet off the stone and stucco walls and watched the flashes of Auntie light up the old paintings and delicate furniture. They partied like that for over an hour and then they went off to take a half hour nap and then they came crashing back with a “you thought we were done?” But they were a bit lighter this time, as if the boogie was over and now it was time for a simple waltz around town, no big deal.

Geni and I alternated our moments of awake and asleep during the storm. She had never been inside a storm like that before and she got up twice and went to the window that overlooked the walkway to watch the water rush down the cobbles and then walked to the balcony window to watch the sheets of rain drop into the bay.

After another hour or so, off they swept, Uncle and Auntie, twirling south down the Dalmation coast.

I drifted off to sleep . . . . . . and then the seven o’clock bells of St. Euphemia struck. The church is so close that it seemed as if the bells were on our roof. You could hear the peals go through the walls to the house next door and bounce back into our bedroom. It was so close that I could hear the harmonics of the metals vibrating from bell to bell, especially as the last peal faded to nothing. Jet lag had a tighter grip on Geni and she slept right through it.

I counted. 60 seconds of overlapping, echoing rings of the bells. Good morning!

We’re not in Eugene, in Oregon, in USA. Nice. 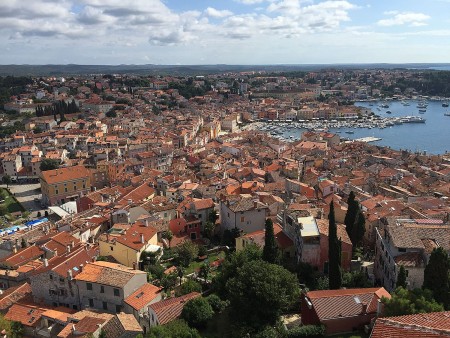 The statue of St. Euphemia on top of the church tower is on bearings and acts as the town windvane. The twenty foot statue changed several directions during the day. The other picture was taken from the top of the tower just beneath the bells. We were up there when the noon bell rang. Just the middle of the three bells rang, a beam rotated by something like a big bicycle chain, and we had to plug our ears. Birds flew in and out of their nests above the bells during the ringing. One of the birds watched the humans come and go from its perch, bell ringing and not.

The 5:30 bells just started. (5:30?) We noticed that there is another bell tower to the south that began tolling at the same time. That must have been why the sound in the am seemed like it was bouncing off the house next door.