The Three Lovely Women from Wales 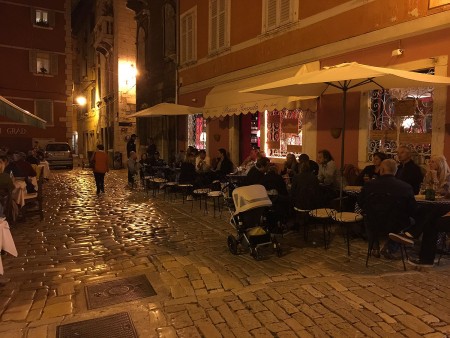 That was all the opening Geni needed and a discussion about ancient needle techniques began. I think that was what it was about anyway. It was nothing I was familiar with at any rate. But I nodded my head and smiled and made supportive noises while drinking wine.

We found out they were from Wales and we talked about the places to visit if we ever went to Wales. We’ll be going to the Gower Coast area, West Wales, North Wales, Cardiff Bay and Cardiff. The whole damn place is beautiful and filled with great people apparently, so of course we have to go.

They said that they were co-workers and they’d been going on holiday together for many years. My idle mind began wondering what their line of work was. I drifted toward medicine for some reason, but it turned out they are policewomen. I did a quick mental review of the past hour to see if I’d done anything worthy of arrest. I’m sure there are men in Wales committing petty crimes in order to get handcuffed by these three. I’m tempted to get lessons in the types of crime that merit the handcuffs while avoiding a criminal record when we visit . . . though Geni probably wouldn’t approve.

We had a great chat and now we’ve got an open invite to visit. Wales was already on a travel list. That choice is firmed up. 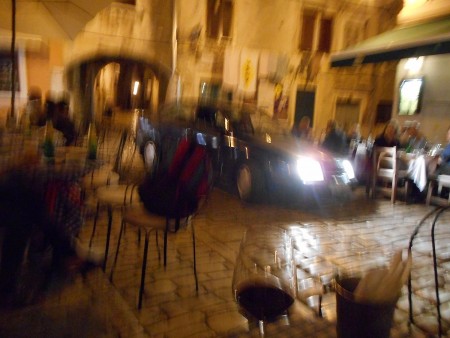 Side note: we went back to this restaurant for our dinner the following night. The waiter, Matej, is a great guy. He speaks six languages and he used at least 4 of them while we were there. He was a lot of fun and so were the women that owned the place. It’s across a narrow walkway from another restaurant, and once an hour or so a car squeezes through. This one was backing up and you can tell Geni rushed her shot from the blur.

We highly recommend Piassa Granda in Rovinj if you ever go there. It’s not super fancy, but it’s amazing how good something can taste with such simple ingredients. I imagine the recipes go back centuries.