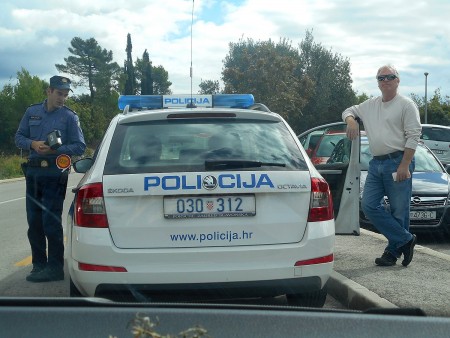 I guess I’ve gotten too comfortable with driving like a European. I’ve seen several speed traps along the way, but never seen anyone pulled over. They were waiting for the dumb American to get over-confident.

I was going 72 in a 60 km zone. We got close to the Dubrovnik airport on our way to Kotor, Montenegro. There were a lot of signs and stuck in the middle of them was a speed limit change to 50 that I didn’t see. That zone was only about 100 meters long, but that was all it took.

There they were. One cop with a radar gun, the other with his itty-bitty STOP paddle. (That’s the sign sticking up out his pocket.) Damn. 300 kuna cash on the spot. I handed him my International Driver’s Permit and stood at the side of the cop car while he filled out a long form. Apparently he wasn’t used to middle names because I’m now on the books as Charles James. But then I had to sign the paperwork and I did the C Magee thing. That puzzled him for a second, but he moved on. He and his partner both signed and the cash went into a leather case.

The rest of the drive to Kotor was slower than expected.