Walking the Walls of Dubrovnik 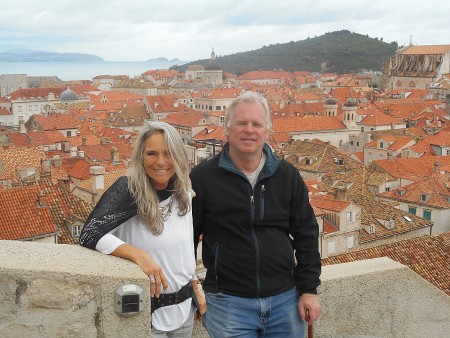 The “must-do” of Dubrovnik is to walk the walls. There are only 3 stairways up to the ramparts. The most obvious one is next to the main entrace at Pile Gate, and it rises to the ramparts very close to the highest point of the walls. The stairway is one way because it’s only wide enough for one person. We watched the climbers for a few minutes on our arrival. It’s a slow-going climb because the entire line of climbers were frequently clogged behind someone who had stopped to huff and puff.

We decided to seek out the least traveled stairway. Not only was the stairway, in the southwest corner of town near St. John’s Fortress, nearly vacant, but it led to one of the lowest sections of the wall, so, fewer steps to climb. The journey to the highest point, Fort Minceta, then became a stroll up long ramped walkways with occasional stairways of three to ten wide steps.

After paying 110 kuna each ($16.37, highest single tourist thing so far) we began our counter-clockwise walk on the walls. We’d only gone about ten feet when our first of several hundred photo opportunities presented itself. We spent so much time at that first spot that we didn’t realize until too late that we’d been surrounded by a tour group. We tried to hustle out of there, but many of the group had already started down one of the narrowest sections of the walk. (The narrowness matters, and is the reason that the walk is one-way. There are too many narrow spots for two-way walking.)

We got about fifty steps down the walkway and had to wait for a couple of selfie-stickers. They planted their backs against the town-side railing, stuck their sticks out over the wall and then wiggled the stick for the best shot. There was no way to get past them without shoving. When I realized that one or two photos weren’t enough, and when I saw them stop to repeat just twenty more steps down the way, the thought crossed my mind of grabbing and throwing the selfie-stick, with attached smartphone, over the wall and into the harbor.

Geni was very insistent that I do no such thing. So I took a deep breath and enjoyed the views into the tiny harbor of about 100 small runabouts and a dozen sailboats as we inched along. We came to a wide spot on the walk and hustled past the selfie-indulged far enough to build room between us and their group. After that we were, mostly, able to proceed at our own pace. 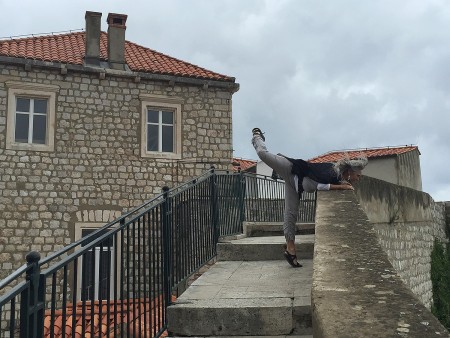 Once again, on this trip for astonished Americans, we indulged in moment after moment of wonder and excitement. Any direction you look, at any time along the almost two hour walk, there is something beautiful and inspiring. Underlying all the emotions is the solid feeling of strength and protection. It’s a protection we didn’t need, but the feeling was there, especially when standing next to a parapet that was twelve feet thick, or when looking down sixty feet of wall to one hundred feet of rock to solid green water bashing the rocks, or when peering through a lookout slot built-in to the wall. 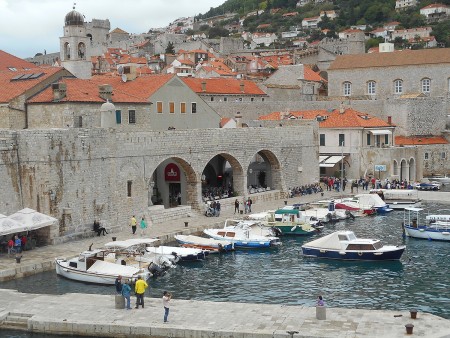 As we came even with the harbor, early on the walk, we had a good view down the Stradun. This is the main street that cuts the town in half. In ancient times it was a canal with bridges from one side to the other. My guess is that it served the function of carrying rain water and sewage to the sea. Now it is filled with tourists shopping the weird mix of candy stores, currency exchanges, bank machines, doo-dad shops, bakeries, jewelry (high and low end), and fashion wear. It’s as if Walgreen’s married Versace and they had kids.

The streets and buildings on both sides of Stradun rise uphill to the walls. In the days long ago, the nobility lived on the mountain side of the town and the working class lived on the ocean side. I wondered why that was the case. 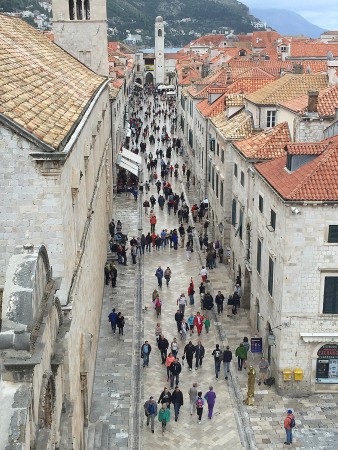 (Note: this photo is from the north wall, not the south wall above the harbor. It gives a better view of Stradun.)

Pause for more Magee conjecturing: the nobility lived mountainside because that gave them the best sunset views. More importantly, most attacks on the town came from the mountain above. That means that cannonballs went over the wall, passed over the rich folks’ homes, and crashed into the homes of the commoners. It’s rather obvious when you look at it in terms of life and death.

— Along narrow sidewalks and through courtyards big enough for a King’s wedding. On limestone pavers and on marble blocks.
— Harbor with small boats on our right, crowds of knicka-knacka shoppers on our left.
— Look to your right, 100 feet down to a moat filled with buses, taxis, and scooters. To your left, rooftop tavernas closed for the season: chairs tipped, tables folded, umbrellas put away. 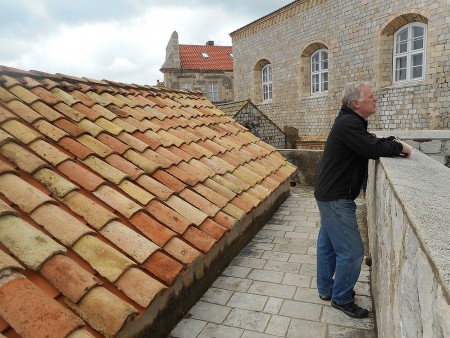 — Uphill, a cable car glides several thousand feet up the side of the mountain. Look to your left at the roofs, walls, and windows of a fairytale town.
— To your right, run your fingers along the red tiles of a roof, to your left is a church with small tower and two bells next to a church with one bell. Both appear to have been abandoned.
— Right, a room in a tower big enough for the soldiers to hang out in when off-watch. Stairs going up to the top of the tower with cannon slots that could cover the field of fire over the tourist bureau and bus loading zones. 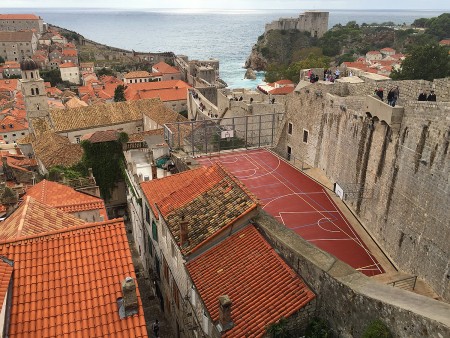 — Left and down forty feet, at the highest point of the wall, an open air basketball court with fences high enough to catch the worst shot. “Nikos, dammit, you threw it over the fence again. The ball won’t stop till the Stradun! Run for it and you better hope a tourist doesn’t steal it!”
— Right, tourists streaming through the Pile Gate. Left, the ancient cistern just inside the entrance and a group of people dressed up for a wedding at a still functioning church.
— Right, the imposing Tower Bokar. Left, a quarter block area of ruins from the Serb bombing. Now home to at least 20 feral cats. 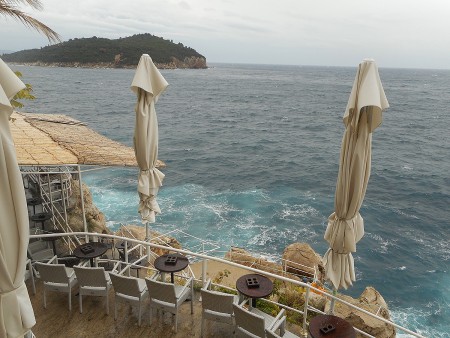 — Right, the Adriatic as far as you can see. Left, a man sitting on his front porch, at one of the few places where homes touch the wall, selling sketches that he made.
— Right, waves crashing into the rocks at the not-so-secret secret Buza Bar that is outside the wall. Left, a courtyard of fruit trees, benches, lawns, and stacks of replacement roof tiles behind the ancient monastery.
— A snack bar beside a wide terrace. We were the only ones silly enough to pay for overpriced beer and wine.

It was tiring. It was overwhelming. We would like to make that walk again someday. Perhaps with a Harry Potter magic spell that turns selfie-sticks into long, soft noodles when they’re within fifty feet of me. 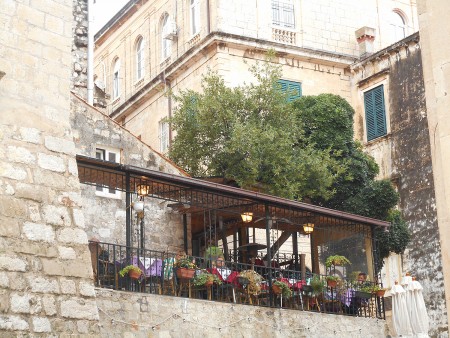 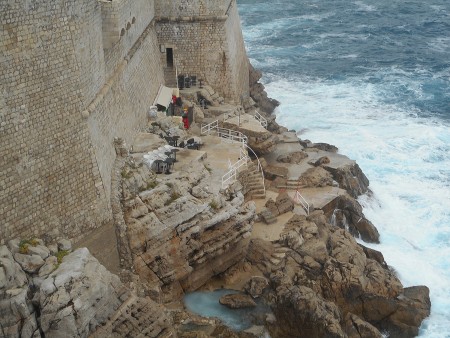 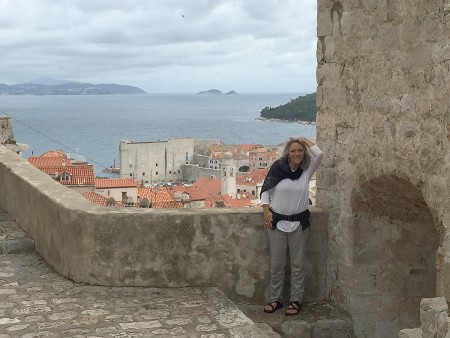 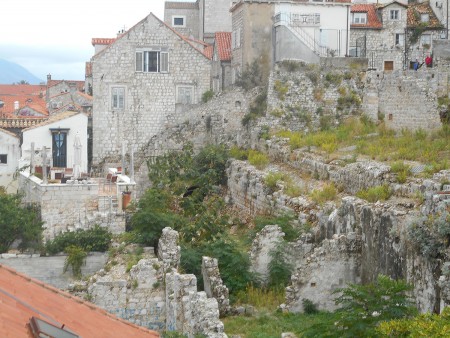 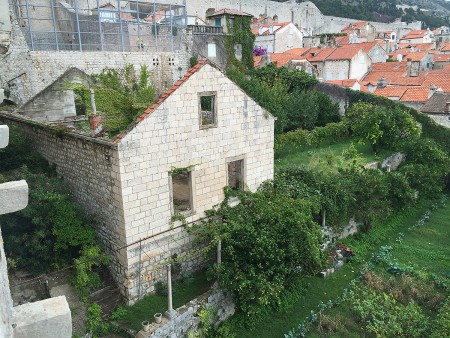 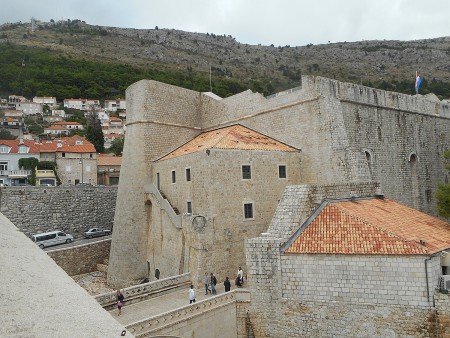 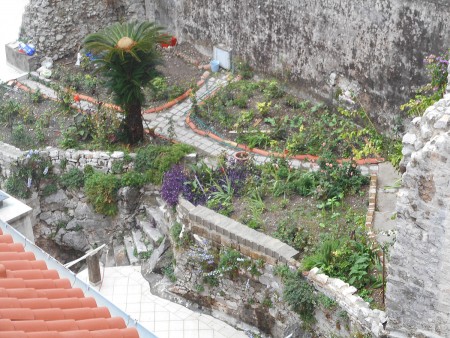 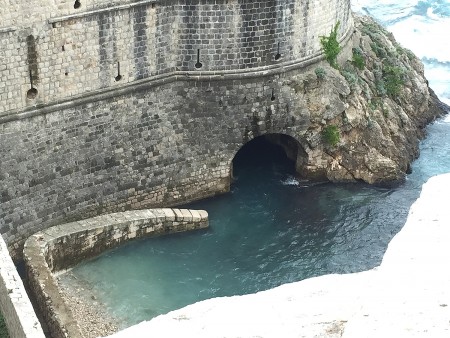 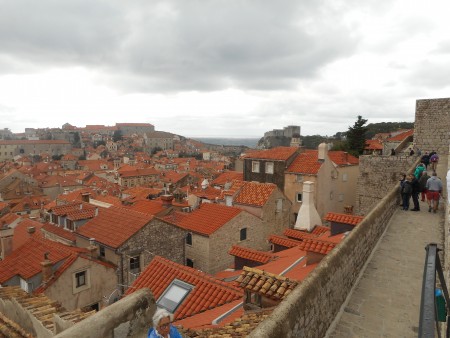 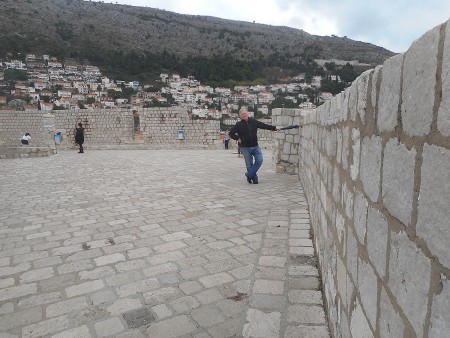 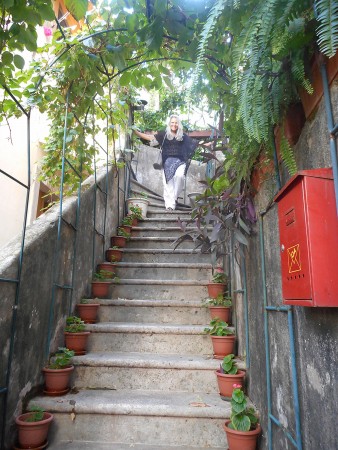 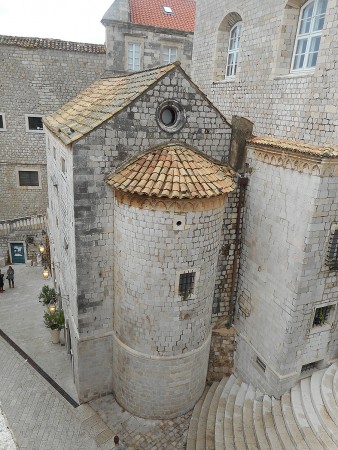 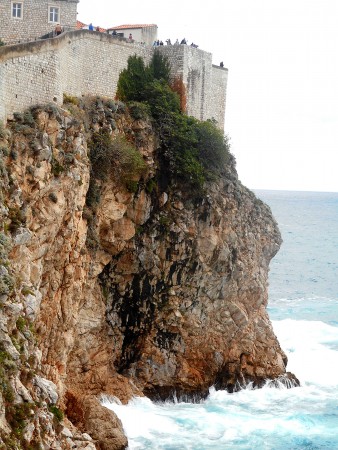 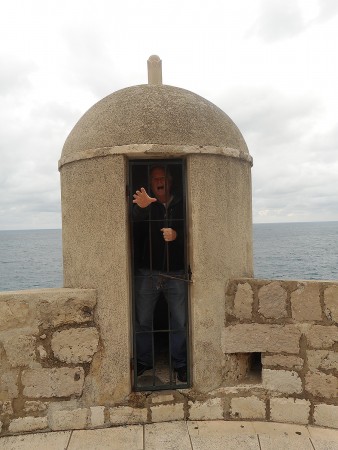 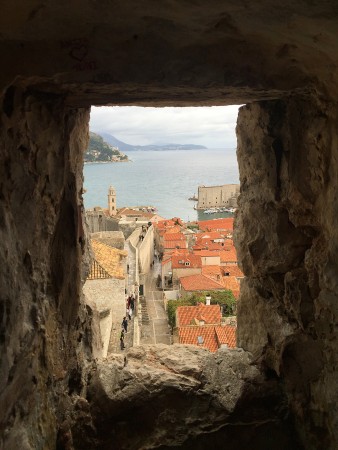 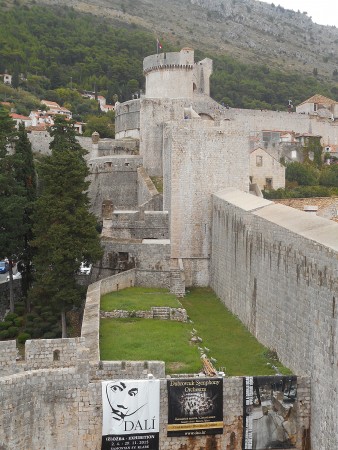 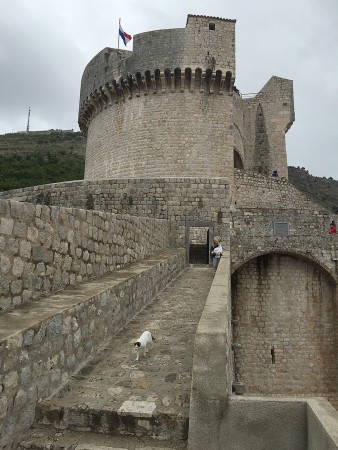